Remain in the Vine 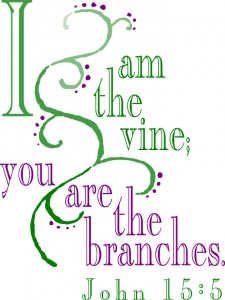 The point of vine and branches is that the branches are connected to the vine. They are in the vine. That, Jesus says, is how you are related to him. You have life only as you are connected to him. It’s not enough to have once made a decision and prayed the sinner’s prayer, or to have walked down the aisle at an evangelistic service. While that turning point may be real, if it is genuine, it leads to a life of being connected with Jesus, drawing your very life from him. Abide, or remain, in Jesus. Paul picks up that concept as well, and frequently speaks of being in Christ. The relationship is pictured in your baptism, in which you were baptized into the Father, Son, and Holy Spirit. Perseverance marks the Christian life.

How do you remain in Christ? Jesus connects it with the word he has spoken. You cannot separate Christ from his word. As Sinclair Ferguson puts it, “In a nutshell, abiding in Christ means allowing His Word to fill our minds, direct our wills, and transform our affections. In other words, our relationship to Christ is intimately connected to what we do with our Bibles!” (In Christ Alone: Living the Gospel Centered Life, pp. 113-114, Kindle Edition.) If you consider yourself to be in Christ, but have little concern for his Word, whether the public preaching or the private study of it in your personal worship, ask yourself whether you are really in him.

Jesus holds out the sobering reality that those who appear to be branches, who may even consider themselves to be in Christ, can be cut off. Branches that do not bear fruit will be cut off, he warns. Less than an hour before they heard these words, the disciples, perhaps unwittingly, had witnessed this pruning. After washing his disciples feet Jesus had identified Judas, the betrayer, by giving him the piece of bread—and had sent him from the room. No longer would he be counted among the disciples. Jesus reads the heart, but church discipline today looks at fruit. It is a serious matter to be cut off from the body of Christ. It is an anticipation of and a warning against the final judgment, pictured in the burning of the discarded branches.

The purpose of Jesus’ words, however, is to call you to remain in him. “All the ethical admonition, comfort, and power that radiate from this farewell have no other purpose than that the church on earth should understand itself as belonging to him in heaven and that it should abide in him as he abides in its members. In this the church, together with Jesus—in accordance with an ancient depiction of the people of God—appears as the vine and the branches in which he, responding to the church’s faith and prayer, its life under his word, its affliction, and its calling in the world, will prove himself to be the Living One.” (Herman Ridderbos, The Gospel of John: A Theological Commentary, p. 483.) Not only do you remain in him, but he remains in you.

If you remain in him, you bear fruit. Being a fruitful branch involves pruning. Different from cutting off unfruitful branches, pruning has the goal of increasing fruitfulness. Look at the vineyards around us. Foliage that seems healthy is cut away so that what remains will be truly fruitful. Undergoing the pruner’s knife is not easy and often is unpleasant, but the result is positive. “We are called, as part of the abiding process, to submit to the pruning knife of God in the providences by which He cuts away all disloyalty and sometimes all that is unimportant, in order that we might remain in Christ all the more wholeheartedly.” (Sinclair Ferguson, In Christ Alone: Living the Gospel Centered Life (pp. 115-116), Kindle Edition.) Most of you can likely think of time of pruning in your life. While we don’t have the answers as to why we go through particular trials, what you have been through can make you able to comfort and encourage someone going through a similar challenge.

Bear fruit to the Father’s glory. What is included in fruit-bearing? Witnessing? Certainly that is part of it. But as the following context indicates, it means remaining in the love of Christ, reflecting the love between the Father and the Son. The command to love includes the rest of the commandments, which give shape and structure to love.

Come to the Lord Jesus Christ. Abide in him, receiving life itself from him. Hear the life-giving word he speaks. Because he is the true vine, bear abundant fruit as you remain in him.