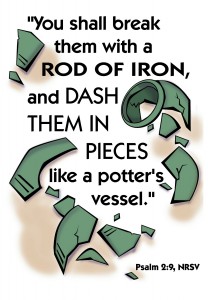 Tremble at the presence of the Lord. Appreciate the majestic kingship of your God. The primary action comes from the One enthroned in heaven. That contrasts with the kings of the earth who rebel. The great King acts by installing his King on Zion. Psalm 2 is linked with Psalm 1. They have even been treated as one Psalm. Note the intertwined themes of judgment and blessing.

No one can successfully rebel. Sinful mankind, including its most powerful manifestations, rises up in noisy anger against the Lord. Rebellion against God is also rebellion against his Anointed, the messianic King. The church in Acts 4 recognized the source and direction of the persecution they were experiencing. The suffering in your life is part of this conflict. Psalm 2 may have been set originally in the context of pagan Philistines or others attacking God’s people. The church in Acts 4 clearly saw the Psalm as singing of the activity of the Gentile rulers conspiring with the leaders of Israel against the Anointed One. You read the Psalm from the perspective of a culture that sometimes is officially agnostic and atheistic–and sometimes takes the more insulting (and subtle) tactic of simply trying to ignore God. Understand your culture! Rebellion is futile–because it is against the One whose throne is in heaven. His scornful laughter rebukes the rebels. The Lord has set up his King. God, rather than ignoring the earth, sets up his Anointed One in Zion. Fear, because you are in the presence of the One who wields the iron scepter. Fear the thought of spending eternity under his judgment. He is the king, whether or not you like it.

Rejoice in the One in whom you take refuge. Worship the majestic Son! This Psalm is one of the more frequently quoted and referenced in the New Testament. Note the descriptions of the Christ. Christ is Son because of what he has done. The Father-Son relationship is eternal–yet the decree of v. 7 seems to point to a specific event. You might think of the incarnation, but Paul in Acts 13:32-33 sees this verse fulfilled in the resurrection of Christ. Paul, like Psalm 2, summons you to take refuge in the Messiah. The resurrected, ascended Lord is sovereign. The subjecting power of the iron scepter may be frightening–but it is also comforting to believers who are suffering for the sake of their Lord. Re-read Revelation, and notice how often the iron scepter is referenced in descriptions of the Christ. Don’t reduce Christ to your buddy, to the solution to your problems. Acknowledge him as King. Worship and serve him as such. Recognize his kingship in the choices you make. “Fear, without joy, is torment; and joy, without holy fear, would be presumption. . . . In the first Psalm we beheld the righteous like a tree planted by the rivers of water; and here we contemplate Christ the Covenant Head of the righteous, made better than a tree planted by the rivers of water, for he is made king of all the islands, and all the heathen bow before him and kiss the dust; while he himself gives a blessing to all those who put their trust in him.” (Charles H. Spurgeon, The Treasury of David, on Psalm 2).

Rejoice as you find refuge in the Christ. Everyone—from the kings of the earth, the power brokers, the movers and shakers, down to the lowliest—is summoned to be wise. Wisdom involves recognizing, worshiping, and serving the King. “Kiss the Son” is an indication of submission and reverence. The only way to serve the Lord is to submit to his Son. Recognize his awesome power and majesty. You cannot rejoice in him without having a reverential fear and awe. Take refuge in the Son. Flee to him as the Savior. Because of the event in which the Father’s decree about the Son was fulfilled, you have become sons and daughters of God. You are not longer at war with God, shaking your fist in his face. Instead, in Christ, he has made you his child. Rejoice in the blessing of putting your trust in him. That is the blessedness of Psalms 1 and 2–and of the remaining 148.

You are at war–but rejoice with trembling, for the victory already belongs to the One in whom you find refuge.