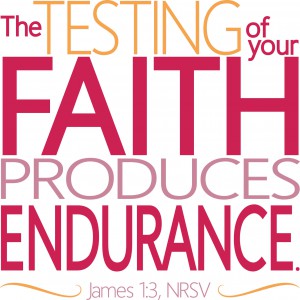 Those who heard the letter to the Hebrews read for the first time may have been surprised, as perhaps you are, to find the name of Rahab appearing in Hebrews 11:31.

Rahab seems an unlikely candidate for this list of those who lived by faith. Rahab (like you and me) was a sinner. Her city, Jericho, was about to be destroyed because of its idolatry and immorality. And Rahab was not just a bystander, but apparently a participant in the sin.

Yet, the spies found refuge with her. Despite her background, she is not only counted among God’s people, but is listed among the people of faith that Hebrews is enumerating. God displays his grace in the salvation of sinners.

By faith Rahab did not perish. Rahab experienced God’s grace in Christ. The rest of the inhabitants of the city died. They were punished because of their wickedness. They failed to trust the God of Israel, though they had heard of his power, Joshua 2:9-11. It is not enough to know about God. You need to actually trust him.

The judgment of Jericho, and the rest of the Canaanites, is an anticipation in time of the final judgment. The salvation God provides is based, not on merit, but on his sovereign grace.

By faith she was saved. By faith Rahab understood the power of God. She recounted the terror of the Canaanites. She recognized God as the God of the heavens and the earth. She entrusted herself to the God of Israel and to the people of Israel. Rahab’s faith is the faith of Abraham and Moses. It is the faith of Hebrews 11:1. Your trust in the Lord Jesus Christ is the same faith, Hebrews 12:1,2. “Not only did they [the spies] hear that the Canaanites had lost courage and the strength to resist, they also encountered a confession of the God of Israel while they were in enemy territory. Evidently the Spirit of the Lord had preceded them. The Spirit of the Lord Jesus Christ, who lived in the midst of Israel, had not only stripped the Canaanites of their power but had established bonds between Israel and Rahab that they knew nothing about.” (S. G. de Graaf, Promise and Deliverance, Vol 1. pp.394f.).

Live by faith! True faith is never alone. Without obedient works, faith is dead, James 2:26. Salvation by faith does not allow for a lax, disobedient life. Faith must come to expression in works. There is no conflict among Paul (Galatians 5:6), Hebrews, or James. “Those who are most exalted are of no account before God unless they have faith; and . . . those who are hardly allowed a place among the profane and the reprobate are by faith introduced into the company of angels.” (John Calvin, Commentary on Hebrews).

God summons you to a covenantal, living faith. Rahab was saved by faith (Hebrews 11:31), but that was a faith that was evident in what she did (James 2:25). She welcomed and hid the spies. She protected them from the king’s soldiers. She switched her allegiance from Jericho and its idols to the God of Israel. God summons you to a whole-hearted commitment to the kingdom of his dear Son, the Deliverer for whose coming Rahab and other believers longed. You also live in a culture where the ugly violence and hedonism of a pagan, Canaanite-like, morality shows through. In this wicked setting, God summons you to live as one committed to his kingdom, to his glory and honor.

God records the story of Rahab’s trust, not to focus on her, but so that you can place your faith in the same Savior that she did.