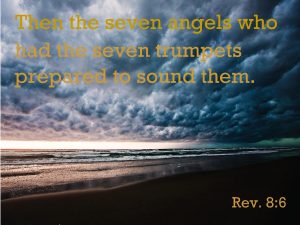 “Prayers and plagues” may have you expecting a prayer to end a plague. But in Revelation 8 God sends plagues on the earth in response to the prayers of his people. But first, there’s silence.

Silence! Stand in silence before the Judge. You might expect the silence of Revelation 8:1 to be a dramatic pause—but that doesn’t seem common in the world of the Old Testament or in John’s day. Look, rather, to the use of silence in the Old Testament, where it accompanies the coming of the Lord in judgment, either anticipation as the Judge arrives, or following the act of judging, being silenced by the justice and power of the righteous Judge, Zechariah 2:13; Zephaniah 1:7-10; Habakkuk 2:20. The breaking of the seventh seal by the Lamb indicates the completion of his righteous judgment, described at the end of Revelation 6. “Silence is creation’s expectant response to the Lord’s impending arrival in judgment. ‘Be silent, all flesh, before the Lord; for he is aroused from his holy habitation. (Zech. 2:13)…. This silence is the calm before the storm. For God’s enemies on earth it is a silence of dread, but for those who dwell in heaven it is the silence of eager expectation.” (Dennis E. Johnson, Triumph of the Lamb, p. 136).

Seven seals are followed by seven trumpets. Don’t think of the woes of the seven trumpets as taking place within the breaking of the seventh seal. Rather, John’s vision takes you through another cycle, another way of viewing the growth of the kingdom of Christ and its conflict with the kingdom of this world. Like the early breaking of the seals, the early trumpets describe preliminary judgments on the earth, while at the end of the cycle you are shown the victory that comes as the Judge returns. Where do you hear seven trumpets in the Old Testament? Go to the fall of Jericho, Joshua 6. As Jericho had to fall in order for Israel to enter the promised land, so the great city of Revelation 16:19–21 will be destroyed. Angels with seven trumpets, and then with bowls of God’s wrath will remove the seemingly omnipotent persecutors of the church.

Pray! The censer forms a transition between the seals and the trumpets. Angels with trumpets, echoes of Jericho, and you might expect mention of swords, spears, and shields. But what appears is an angel with a censer, a metal dish containing incense. It reminds you of the altar of incense in the Tabernacle and later the Temple. See Exodus 30:7–10; Luke 1:8–10; Revelation 5:8; 6:9–11. The smoke of the incense arises with the prayers of God’s people. Then the angel hurls the censer on the earth. The thunder, rumblings, lightning, and earthquake (remember Exodus 19?) indicate the presence of the Lord in judgment. Revelation 8:2–5 does double duty—closing off the seven seals and introducing the sounding of the seven trumpets.

God hears your prayers. The saints under the altar are crying out, “how long?” God’s people on earth are facing suffering and are turning to the Lord in prayer. The incense rising from the censer along with the prayers of the saints assures them that God hears. He gives you the same assurance as you face the challenges of living as a citizen of the kingdom of heaven—but one still walking here on earth. There is more than assurance here. The censer challenges you to pray for God to do his work on earth and bring in his kingdom. What brings down the mighty opponents of God is the coming of the Lord himself, but his work is accomplished in part by the prayers of his people. “Indeed, prayer is one of the important military tactics used by the soldiers of Christ….” (G. K. Beale, The Book of Revelation, p. 463). Do you have any idea how powerful your prayers are? Keep praying!

Plagues. God brings judgment on a rebellious earth. As each angel sounds his trumpet, destructive judgment of some kind falls on the earth. The destruction and suffering are terrible, but like the four horsemen loosed as the first seals were broken had been given power over a quarter of the earth, so these destructions of the first four trumpets are limited to a third of what they strike. Don’t push what is imagery too far. John doesn’t intend for you to ask how, if the sun and moon had already been darkened and the stars had fallen at the end of Revelation 6, how a third of the sun, moon, and stars, can be struck at the sounding of the fourth trumpet. Rather, that points in the direction of the trumpets portraying the same events as the breaking of the seals but from a different perspective (and there will be other such cycles yet to come in the book). Though not in identical order, and with different numbering (10 plagues, 7 trumpets) these judgments recall the plagues God sent on Egypt. The star, Wormwood, in the third trumpet, draws on imagery in Jeremiah 9:15 and elsewhere. God’s judgment is bitter. After the sounding of first four trumpets, an angel proclaims woe on the earth at the prospect of the remaining three trumpets. Just as the first plagues of Egypt had affected the whole land, until God made a distinction, and the later ones struck only the Egyptians, so the sounding of the fifth trumpet specifically will exclude those who have received the seal of the Lamb on their foreheads.

God brings deliverance to his people. Is the prospect for the church in an increasingly hostile world discouraging? (Note the cry by Peter Sanlon, a young Church of England pastor, calling God’s people to prepare for what he calls exile—increasing direct pressure from society and government authorities for God’s people to conform to the secularism and paganism of the culture.) Is your own struggle inyour Christian life something that appears too challenging? Remember the plagues on Egypt and see the soundings of the trumpets in the same light. Yes, the God of Israel went toe to toe with the false gods of Egypt (the divine Nile, the sun god, etc.) and utterly defeated them. But he was doing more than that. He told Moses at the bush that he had heard the cry of his people. He sent Moses to command Pharaoh to let Israel, his firstborn son, go. The Lord heard those prayers and responded. It is not only for your deliverance that you should be praying. It is for the triumph of the kingdom of God. In order to answer those prayers the Lord has given you a deliverer who is a prophet greater than Moses. He has given you his own Son to be the Lamb that was slain in order also to be the Lion of the tribe of Judah. “The bloodying of the sea and the death of its creatures parallel the the bloodying of the Nile in the time of Moses. The worldly powers that oppress God’s true Israel are to be shaken at the source of their confidence.” (Dennis E. Johnson, Triumph of the Lamb, p. 145).

Some of the symbolism of Revelation may be difficult, but the underlying message is clear. The Lamb triumphs—and so do you. Keep praying, and remain faithful!