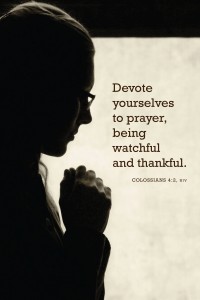 What is prayer? A quick request to God when you need something? That is part of prayer, but prayer is much more, at least as Paul asks the church at Rome to pray for him, Romans 15:30-33. When you pray, you interact with the triune God.

You pray in the name of and through the intercession of Jesus Christ. Exalted to the right hand of the Father, he continues to intercede for you. But Paul does more than that. As John Murray remarks, Paul “makes Christ Jesus his plea for compliance with his request” that the church pray for him. Matthew Henry gives the sense of Paul’s request: “For the Lord Jesus Christ’s sake. He is my Master, I am going about his work, and his glory is interested in the success of it: if you have any regard to Jesus Christ, and to his cause and kingdom, pray for me. You love Christ, and own Christ; for his sake then do me this kindness.”

These prayers are addressed specifically to God the Father. Beware of the tendency to be unitarian as you pray. All three persons of the Trinity are involved! As you pray you are speaking directly with God! Don’t ever lose the sense of reverence and awe that should accompany that privilege.

Although prayer can be as simple and easy as breathing a request or thanksgiving to God (Nehemiah did that as the king asked him why he was sad), real prayer can involve real work. Paul asks the believers to “strive together with me in your prayers.” A young athlete I know has a T shirt that reads, “You practice until you get it right. I’ll practice until I can’t do it wrong. Who do you think will win?” If an athletic skill takes work to develop, don’t hesitate to work at praying.

Satan loves to hinder your prayers, to distract you, to make you focus on the unimportant. Your (and my) own laziness makes it easy to treat prayer too casually. Prepare for prayer. You are entering the presence of the King! Earnest prayer will persist. It will wrestle with God–think of Jacob wresting with the Angel of the Lord at the brook, Peniel.

Pray specifically. Paul lists several points that concerned him, specifics for which he asked for prayer. He understood the threats from unbelievers that faced him in Jerusalem. He also recognized the sensitivity of his own service, bringing a gift from Gentile churches to the poor, suffering mother church in Jerusalem. Would that gift help build the unity of the body of Christ, or would it become an occasion for suspicion and perhaps jealousy? And he asks prayer for his safe arrival in Rome, from where he plans to go forward with the good news. As you reflect on your prayer life, where do you need to be more specific?

As Paul asks for pray for his arrival in Rome with joy, he recognizes that this will be “by God’s will.” That does not detract from persistence in prayer, but it does recognize that God is in control. You know from reading Acts, that Paul did eventually reach Rome, but not quite as he seemed to have expected in this letter. He was mobbed, arrested, held in prison, and then shipwrecked on his trip to Rome, which he finally reached as a prisoner. Yet who knows how much his deliverance at several crucial points in that difficult journey depended on one of the means that God used to protect his servant–the prayers that Paul had requested from the church at Rome!

Paul concludes his request for prayer with a benediction, a blessing which ought to warm your hear to prayer. “May the God of peace be with you all. Amen.” The heart of Paul’s rich letter to Rome is summarized in that blessing. The righteousness of God has been revealed in Jesus Christ, forgiving sinners and declaring us just. God is at peace with you in Christ, and has filled you with his peace. You are alive in Christ, not only being a living sacrifice, but also communicating directly with God as you pray!