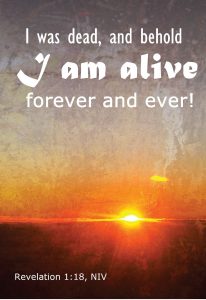 What do you do when you see something strange? I am tempted to stand and look. The Book of Revelation is full of strange sights—or at least the description of strange things. That includes Revelation 1:9-20. John’s purpose is not to make you exclaim and stare in amazement. Rather, he writes to encourage and comfort you—and to motivate you to trust in and serve the glorious Lord Jesus Christ.

Patiently endure suffering. John, in exile, is a companion in tribulation. John was in exile on the island of Patmos because of his faith. He writes to suffering churches, but not as someone outside looking in. He is a fellow sufferer. He is in exile. Words to a suffering church are relevant to you and me. Last Sunday before some of us had left the building, we learned of the murder of many members of the Sutherland Springs Baptist Church. John’s vision took place on the Lord’s Day, the day that particularly belongs to the risen Lord. (There is a reason the church worships on the first day of the week. As those who suffer along with John and his first century hearers, we need to persevere. How can you do that? Listen to what John hears and look at what John sees.

Understand the images of Revelation. John draws, not with pen or brushes, but with words. Many of his words create pictures, pictures that are symbols. Some of them sound strange to us, but the more we learn about the time in which John wrote and especially the sources for his symbols, the better we understand them. Some images terrify, but the picture here in Revelation 1 comforts and reassures. The loud voice like a trumpet recalls the appearance of the Lord to Israel at Sinai. Turning, the first thing that John sees are seven lampstands. Recall the seven-branched lampholder of the Tabernacle and the vision in Zechariah 4. At the end of the chapter the lampstands are identified as the seven churches who were the first recipients of what John wrote. But there is something more important than the lampstands.

See the Son of Man. Appreciate the power and glory of the Son of Man. One of the primary sources for the imagery here is Daniel 7. Before you get to the Son of Man, Daniel sees various strange beasts—keep them in mind, because in combined and changed form, you will see them in John’s writing. In contrast to the kingdoms of the earth represented by the beasts, Daniel sees the Ancient of Days enthroned, and one like the Son of Man coming on the clouds. (Remember that “Son of Man” was the preferred way that Jesus spoke of himself during his earthly ministry.) In Revelation 1, some of the characteristics of the Ancient of Days, such as the white hair, now characterize the one like a son of man. Imagery of Daniel 10 and Ezekiel 1 is reflected here as well.

Your Priest/King stands among his churches. The robe and sash call to mind the high priest, imagery emphasized by what he is doing. He is carrying out the priestly task of tending the lampstands. He is a regal figure, and the function of judging is reflected in the double-edged sword coming from his mouth. Recognize the symbolism, and don’t press details beyond their intent (the right hand holding seven stars is the hand that is placed on the prostrate and terrified John). The comfort and encouragement for John’s co-sufferers, including you, is that, despite appearances, you are not alone. The Son of Man is in your midst! “Jesus, the holy One of God, is present among them [the churches, represented by lampstands] and knows their situation more truly than they do. The appearance of the churches as golden lampstands also signals their calling to reflect the light of God’s heavenly court into the present darkness on earth.” (Dennis E. Johnson, The Triumph of the Lamb, p. 61).

Trust the Living One. He was dead and is alive—forever! Like John, you can feel the touch and hear the voice of your Savior. The Lord takes the initiative and reaches out to his apostle. John, who had leaned against Jesus at the Last Supper, knew that touch. Along with the other disciples he had heard the comfort of Jesus’ command, “Do not be afraid.” The holy majesty of the Lord is displayed here, not against John, whose sins had been forgiven by Christ’s work, but against the enemies of Christ and his church. You still hear the comforting voice of the Savior as he speaks to you in his Word. Living is the adjective that God used frequently in the Old Testament to distinguish himself from the idols being worshiped. Although the idols may morph into different forms over the centuries, the Living One does not change. He is the great “I am.” He has gone through death and has emerged triumphant. Appreciate the emphasis on Christ as Victor that has characterized the worship of the church. You have the comfort of knowing that the Lord died for you. But his death was in order to his resurrection. And his resurrection is yours as well. He is the firstborn from the dead, Rev. 1:5. No wonder the church began to call the first day of the week the Lord’s Day.

Christ holds the keys to death. Mors vincit omnia is an old phrase, death conquers all. But it has met its match. Christ identifies himself as the one who was dead and is alive. As the Living One, he is alive for ever and ever. As the triumphant Savior, he holds the keys to death and Hades (the realm of the dead). This verse anticipates Rev. 20:14, where, upon Christ’s triumphant return, death and Hades are destroyed. Your last enemy will no longer be able to touch you if you are united to Christ by faith. Keys grant access. Because Christ holds the keys to death, ultimately there is no such thing as an untimely death—no matter how much it may appear that way to us. Geerhardus Vos comments regarding Matthew 16:18-20: “The underlying idea would be that Jesus through His resurrection will so fill His Church with unconquerable life infusing it into Her by the Spirit, that death will be wholly conquered by the Church (Rev. 1:18).” (Biblical Theology, pp. 427-428).

The imagery may be strange, but is should fill you with hope and confidence. Because the tomb is empty, because the Living One holds the keys to death and Hades, do not be afraid, but rejoice!