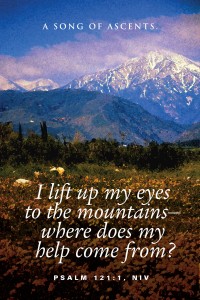 It is not the hills that give protection, but the One who comes from the hills, the Lord, who has made Jerusalem the place where his name dwells. V. 2 is a confession of faith, a confession in which the Psalm invites you to join. Your help comes from the Lord. His name reflects his covenant faithfulness to his people. But, unlike the gods of the surrounding nations, he is not simply the god of this mountain, that hill, or the country over there. Rather he is the Creator of the universe. Understand the transcendence, the omnipotence, of your God. And yet he is concerned with you, the individual believer.

Is vs. 3 a priest responding to the pilgrim’s confession in vv. 1 and 2? Or are these voices arising within the Psalmist? Perhaps we can’t tell–but there is dialogue going on.

Your keeper does not sleep! There is no point at which the enemy can launch a surprise attack and catch him unawares. Sun and moon, day and night, the Lord is your protector.

The only way that we as sinners can enjoy that care is if God deals with the guilt and pollution of our sin. And he does that in Christ Jesus, the true Passover Lamb. And whether this song of ascents was sung on the way to the Passover or another feast, it celebrated the sure presence of God as the mighty redeemer of his people. It summons you to trust Christ, and to keep on trusting him.

How does God’s faithfulness fit with the suffering you face? Paul deals with that in Romans 8. As you suffer, look forward in hope. “The present time” is this age, this evil age, this time in which we live in a sin-cursed world. You do have the firstfruits of the Spirit. You might expect the Spirit’s presence to relieve you from suffering. Yet you face suffering. Don’t let it take you by surprise. Don’t assume that God has forgotten you, or even that there is necessarily some particular lesson that God is trying to teach you through your suffering– though you may find times of suffering to be times of special grace and fellowship with God. You share in the suffering of Christ. Your union with him involves suffering.

What is included in that suffering? Richard Gaffin puts it well: “In the immediate context of Romans 8 this ‘weakness’ has the broadest conceivable scope; it includes but is not limited to particular struggles and difficulties peculiar to one believer in distinction from others. Rather, it is the weakness-‘sufferings’ of ‘the present time’ (v. 18). . . . All told, ‘weakness’ is the mode of the believer’s entire existence in ‘this present evil age’ with all the limitations, suffering, and temptation to sin this existence involves (cf. Heb. 4:15).” (Perspectives on Pentecost, p. 85).

No only do you suffer, but the creation suffers with you. Even the inanimate creation was subjected to futility. The fall affects not just mankind, but the rest of creation as well. While we need to be careful about being too dogmatic about specifics, it is not hard to see futility and frustration even in the creation around us.

The frustration and futility is not something that happened because of the will of creation. Rather, God subjected it, and he subjected it to frustration in hope. It is an act of God–though not in the sense that insurance companies use that language. Redemption has cosmic overtones. Appreciate its breadth. Don’t limit God’s rule and plan to the salvation of individuals and to personal sanctification. All of life must be lived to the glory of God.

Take hope in God’s redemption. Your suffering looks forward to future glory. If the creation looks forward to your redemption, how much more should you! Your future glory is described as adoption. (Paul is not denying your present status as God’s adopted children.) Look forward to the fruition of your sonship, to the glorious freedom and maturity you will have when you are perfectly God’s children.

Because you will be redeemed, you have grounds for hope today. Your bodies will be redeemed. Avoid any dualism. The resurrection of the body is a vital part of your redemption, see 1 Corinthians 15:42, 43, 51-53. You have grounds for hope in this life. Paul is building towards Romans 8:28. The certainty of the resurrection motivates you to obedient service, 1 Corinthians 15:58.

Trust the Lord with everything—forever. The Lord keeps you from all harm. Note how a similar concept is developed in Jesus’ words about coming tribulation, Luke 21:16-18: suffering, even to the point of martyrdom, “but not a head of your head will perish!” If your life is in the hands of the Lord, you keep it, even if you lose it. In fact it is only by losing your life for Christ’s sake that you find it. This Psalm, like the Gospels, pushes you away from yourself to trust Christ alone.

The Lord watches over your coming and going. Derek Kidner writes: “The Psalm ends with a pledge which could hardly be stronger or more sweeping. Your going out and your coming in is not only a way of saying ‘everything. . . : in closer detail it draws attention to one’s ventures and enterprises (cf. Ps. 126:6), and to the home which remains one’s base; again, to pilgrimage and return; perhaps even (by another association of this pair of verbs) to the dawn and sunset of one’s days. But the last line takes good care of this journey; and it would be hard to decide which half of it is the more encouraging: the fact that it starts ‘from now’, or that it runs on, not to the end of time but without end; like God Himself who is (cf. Ps. 73:26) ‘my portion forever’. (Psalms 73-150, p. 462).

Lift up your eyes to the hills. But look beyond Mt. Hood. Look to the heavenly Jerusalem, look to the maker of the heavens and earth, and keep on entrusting yourself to him.