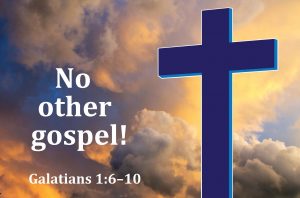 If someone offered you a Rolex watch for a mere $500.00 would you buy it? If you checked the web and discovered that Rolexes are selling from $2,000.00 on up to hundreds of thousands of dollars, and millions for some collector’s items, you’d properly conclude that this watch was a fake. Galatians 1:6–10 reminds you that a counterfeit gospel is no gospel at all.

There is no other gospel. There is another gospel. Missing from this letter are not only usual expressions of praise for the recipient church, but also a section of thanksgiving. The heart of the gospel is at stake, and Paul must warn the Galatians. Gospel means good news. The first four books of the New Testament bear that name, because they are the account of the good news of the life, death, and resurrection of Jesus. Paul summarized his gospel in 1 Corinthians 15:3–5. The churches are in the process of leaving the gospel Paul preached and are turning to another teaching. Paul can appropriately call this another gospel. Paul is astonished at the speed of the desertion from the true gospel to a false by the Galatians. The present tense “are deserting” indicates an ongoing process, not something that is an accomplished fact in history. There is still room to hope, because the desertion is not complete. “And not only is the truth more than the highest ranking minister of God, but as the gospel — which constitutes the norm of the divine redemption in the world — it is so holy that anyone who independently modifies it brings the curse of God down upon his head.” (Herman Ridderbos, The Epistle of Paul to the Churches of Galatia, p. 50).

The other gospel is not a gospel at all. The “some people” are teachers who have come to Galatia, apparently from Jerusalem. Because of their insistence on keeping the ceremonial laws of the Jewish nation, they are called “Judaizers.” Some of their teaching resembled Paul’s: they believed in Christ as the Messiah, they probably talked about faith in him. Paul also believed in keeping the law, Romans 8:4, so his views seemed to resemble theirs at points. For Paul the formula was: believe, be saved, keep the law. For the Judaizers it was: believe, keep the law, be saved. Yet the latter is not really good news at all, for it makes salvation dependent on one’s works. This counterfeit gospel is found in the cults today. Something of it even rears its head in Christian circles, when the sufficiency of Christ’s work is compromised by making salvation dependent on man’s efforts. Consistent Arminian theology compromises the gospel. (Be cautious about jumping to conclusions about individuals–by God’s grace people are blessedly inconsistent.) “We must trust Christ for nothing or for all; to trust Him only for part is the essence of unbelief. There are two ways of being saved, according to the Apostle Paul. One way is to keep the law of God perfectly. That way is closed because of sin. The other way is to accept the gift of salvation which Christ offers us freely by His cross.” (J. Gresham Machen, Machen’s Notes on Galatians, p. 53).

Don’t believe another gospel. False gospels are to be condemned! Don’t be misled by false claims of authority. Paul renounces a different gospel, even though it might preached by Paul and his associates, someone else, or even an angel from heaven! “[T]hat which the Apostles teach is. . . the inspired Word of God before all other things. No theologian would dare say of his work what Paul said to the Galatians; ‘But though we or an angel from heaven preach any gospel other than that which we preached unto you, let him be anathema’ (1:8).” (Geerhardus Vos, Redemptive History and Biblical Interpretation, p. 21). Don’t listen to an “easier” gospel. Some try to tone down the offense of the cross (some forms of evangelism in our culture). Some make difficult works the basis for salvation. Some even make a decision or the act of faith the basis for salvation. New theologies, whether the old liberalism or neo-orthodoxy with its demythologizing the gospel account, are false gospels. The “openness of God” theology ultimately has a God different from the God of the Scriptures. To pervert the gospel is to be condemned, verse 9, which repeats the sanction of v.8, and makes it more specific. It is not a mere wish, but an actual curse, setting the person apart for God’s wrath. Paul does use strong language, though he can be very accommodating at times, Philippians 1:15-18; 1 Corinthians 9:19-23. Don’t take Paul’s language here as an excuse to attack brothers and sisters over minor issues. But a false gospel brings Paul’s curse.

Remember whom you serve. Apparently Paul had been accused of changing his gospel to suit his audience—not so, in light of the curse. You must serve Christ, regardless of the cost. Faithfulness to the gospel may be challenging, both for individual believers, and for the church. But, remembering whom you serve gives you strength and boldness. “As God is the author of the gospel, so gospel authority is never inherent but always derived. It is only as the messenger remains faithful to the divine message that he speaks with divine authority.” (Geoffrey B. Wilson, Galatians: A Digest of Reformed Comment, p. 21).

The bad news is that there are fake gospels out there, gospels which have a superficial appeal. The goodnews is that, because you trust the One who is at the heart of the good news, you stand before God with your sins forgiven. You can make his good new known, and you, by his grace, can live to his glory.