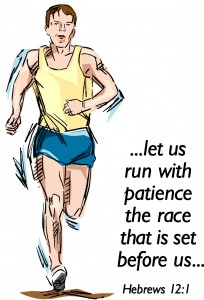 As you turn to the Lord, you need a mediator. Samuel was a judge, an office of rule, but he also was a prophet, and sometimes functioned in a priestly role. He reminds you of Moses, and anticipates the King greater than David, who would also be prophet and priest. In fact, Samuel could function as mediator only because of the Mediator who was to come, and who was active even at this point in the history of God’s people. Pouring out water may picture the people pouring out their heart-felt repentance. In any case, the Philistines take advantage of this religious gathering, and seek to repeat their victory over the Israelites as they had two decades earlier. This time, instead of trying to manipulate God by carrying his ark into battle, they cry to Samuel to intercede for them. Whether it is in your own walk before the Lord or in the life of his church, we need the intercession of One God has appointed.

As he responds, live in the help of the Lord. He has helped you. He helped Israel in response to Samuel’s prayer and sacrifice. The Lord thundered from heaven, panicked the enemy, and routed them before his people. Following that, Samuel set up a stone and called it Stone of Help or Ebenezer. Every time people passed the spot, they were reminded of the Lord’s help. The stone had almost a sacramental significance, pointing to the deliverance God provides. “Yahweh God, demonstrating his sovereign power and governance over creational forces, caused the Philistines to panic. . . . Yahweh’s help and presence were acknowledged and memorialized by means of a stone that was named Ebenezer, ‘Thus far the Lord helped us.’” (Gerard Van Groningen, From Creation to Consummation, p. 480). The marker may have both a geographic and a temporal significance. For us as well, it is good to mark how far the Lord has helped us. We need the reminder. We have come, not in our strength, but in his.

With the Lord’s help, continue to move forward. The stone pointed Israel back to what God had done, but also anticipated more to come. The judgeship of Samuel was a lengthy time of the Lord’s blessing. But the Lord, who had helped to that point, was not about to stop. The judgeship would be replaced by kingly rule, and initially, at least, a golden age of God’s blessing. The kingly rule, no less than Samuel’s intercession, pointed to the messianic King.

Today you look back, not just for a half-century, but to what happened a couple of millennia ago. The ultimate help of the Lord has come. But, like Israel in Samuel’s day, you still look forward. Hebrews puts you, the New Testament believer, in Israel’s sandals. Just as Hebrews 3 and 4 warns you to walk by faith to enter you heavenly rest, so Hebrews 12, in view of the testimony of those who did walk by faith, summons you to press forward. The author and perfecter of your faith has gone before you. He is the ultimate help of the Lord. He enables you to continue your race.