Made Alive in Christ 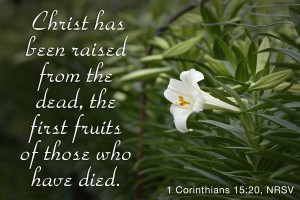 Why is the resurrection of Jesus Christ important? To show that he is truly divine? Yes, that’s important. But what Paul emphasizes in 1 Corinthians 15:20-28, is that the Christ is raised as man!

Jesus was raised as the firstfruits. You need the resurrection of Christ because of the sin of the first Adam. Mankind sinned and fell in Adam, 1 Corinthians 15:21-22. The idea of firstfruits includes the concept of representation. Here, and in verses 45-49 as well as Romans 5, Paul emphasizes the role of Adam. He was your representative when he sinned and fell. Death entered the world through his fall.

The historicity of the first Adam is an important part of Paul’s thinking. Denying that leads to other serious errors. If Adam, instead of being a historical person, is just a teaching model to explain evil in the world, there was no transition from the perfection of the Garden of Eden to sinful man. Inevitably, that has consequences for what happens at the other end of history. This kind of denial is influencing those who call themselves, “Evangelical.” But Paul, like Genesis 1-3, sees Adam as a real person, as your real representative, whose sin had drastic consequences.

But, thanks be to God, through man, through the Man, the God-man, Christ Jesus, comes the resurrection from the dead. The resurrection is at the very heart of the gospel, 1 Corinthians 15:3-4. Christ is raised as the second Adam, the last Adam. Not only is the resurrection of Christ (and your being united with him in his resurrection) just as important as his death in your place, there is a sense in which you can say that Jesus died in order that he might be raised. John Murray wrote: “The death of Christ is not an end in itself. It is subordinate to a great purpose that can be achieved only through resurrection.” (“Who Raised Up Je­sus?” The Westmin­ster Theological Journal, May 1941, pp. 119-120).

But why was the Man, Christ Jesus raised? To rule. Christ rules over all things. He puts down all rule and authority, v.24. Anything that opposes God will ultimately be destroyed. The kingship of Christ encouraged the early church as it faced persecution. It gives you courage in obedience today. This includes human authority and power. The humanism and secularism of our culture are not omnipotent. It also includes spiritual forces that oppose God. No area of existence is free from the authority of Christ. Christ destroys death itself, v.26. Death, the curse upon sin, is overcome by Christ’s work.

Christ rules because he was raised. Christ’s rule includes the subjection of his enemies under his feet. V.25 is a paraphrase of Psalm 110:1. When does that subjection take place? As you see the problems of the world you may be tempted to look for strictly (or primarily) future fulfillment, but Acts 2:34 connect the Psalm with Christ’s resurrection and ascension. You need the eye of faith to see Christ’s present kingly rule.

Christ is already ruling. His rule grows out of his resurrection, not our resurrection. There is an “already/not yet” tension in his rule. D Day has arrived, VE Day is yet to come. To ignore the “already” aspect is to surrender the world to the devil and his hosts. To ignore the “not yet” aspect is to engage in triumphalism which depreciates the suffering which grows out of your union with Christ. Share Paul’s optimism!

God will be all in all. Christ’s messianic rule is in view. This rule is marked by a beginning and an end. It contrasts with God’s eternal rule, although, as God, Christ does participate in the divine, eternal rule). The beginning is marked by Christ’s resurrection and ascension. The end is determined by the complex of events identified variously as his coming, v.23; the end, v.24; and the last trumpet, v.52.

This rule is given to Christ by the Father. V.27 is from Psalm 8:6, compare Psalm 2:7-9 (& Acts 13:33). The heavenly rule of Christ can be seen as the Father’s reward to him for his obedient suffering and death. It is the means by which his work of redemption is carried to its completion.

The glory belongs to God alone. The kingdom of Christ becomes the kingdom of God, v.24. He gives the kingdom to his Father. The work of redemption is complete at “the end.” All foes then submit to him. Your choice is not between submission and non-submission, but between willing and unwilling submission. Here is not only a hint of the glory that would have been mankind’s had the first Adam not sinned, here is all the glory of the perfect God-man.

God becomes all in all, v.28 All happens to God’s glory. Even Christ’s messianic rule melts into God’s eternal glory. The Triune God will be all in all.

Why is the resurrection of Jesus Christ important? Because you, who bear the image of the first Adam, now are alive in him, sharing in the new life that is his as the risen Savior.