Live as a Pilgrim People 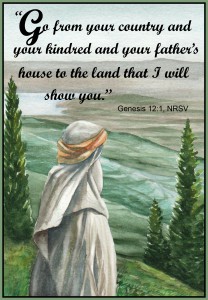 What does it mean to live as a resident alien in this country? Hebrews 11:13-16 describes God’s people as aliens, yet residing in this world.

Recognize that you are an alien. Abraham lived as a resident alien. Hebrews draws your attention to him, not because he is so different from you, though in ways he was, but because of the similarities. He lived as a stranger in a foreign country. It took faith to travel to the promised land. It must have taken more to continue to live there as an alien. Abraham owned no land until he purchased the cave of Machpelah, Genesis 23. His actions, his life-style confessed that he was a stranger. Why? He looked for a city with foundations, v.10. Abraham knew that God’s promises involved more than the real estate of Canaan. He (and the patriarchs) were looking for a city built by God, v.10. It was neither Ur nor just real estate in Canaan. Rather, they sought a heavenly country, v.16. Hebrews has no call for a return to the land of Israel. The focus of God’s promises, the fulfillment of his prophecies, lie not in ownership or occupancy of particular territory in the Middle East, but in the reality which his Son has introduced. “The Patriarchs even in their day saw the unnecessary character of the earthly Canaan, for they looked for the city which has foundations, whose builder and maker is God. Therefore they considered themselves strangers and pilgrims on this earth, even when they were living in the land of Canaan, the promised land.” (Geerhardus Vos, The Teaching of the Epistle to the Hebrews, p. 67).

Confess that you are an alien here. Your life ultimately does not belong here. “Here” is not a contrast of the material with the immaterial, but rather heavenly (future, but coming down), contrasted with the rebellious, sinful, corrupt world in which we live. You have been translated into Christ’s kingdom, Colossians 1:13. Your life belongs above, Colossians 3:1-4. Hebrews can be described as instructions on how to live as resident aliens, as strangers in a foreign land. You are searching for a heavenly city. In a sense you have come to the heavenly city, Hebrews 12:22. Yet you are still seeking it, Hebrews 13:14; 11:16. That heavenly city, not an earthly restoration to Canaan, is the goal of all believers. Knowing where your citizenship is enables you to hold lightly to the things of the world.

Live in the land in which you reside. Do not confuse the kingdom of God with the kingdoms of the world. Look past the charisma, the rhetoric (“limitless faith in the capacity of the American people”), and examine the commitment expressed in what you hear. Beware of allowing the church to be co-opted into being a political arm of some party–even if you agree with many of the planks in the platform. Don’t wrap religion in your flag.

Although you are not of the world, live and work in it. Christians have sometimes responded by being “other worldly.” Although some good things come out of the trend in the early church towards hermits and monasticism, too often these were attempts to flee the world. Similarly strands of post-Reformation have considered involvement in government, military, and politics sinful and worldly. Look at Abraham’s conduct in the land. Although he did not own it, though he didn’t belong there, he dug wells and built altars to worship the Lord. He engaged in battle when his nephew was attacked and captured. And he eventually bought a burial cave for Sarah, when she died, because this was the land that would eventually be given to his descendants. Similarly, you live in a creation that is still under God’s control and is being renewed by him. Thus you can work hard in it, because what you are inheriting is the new heavens and the new earth, not just some ethereal, cloudy existence. There is a connection between the steadfast work you do today an what you will inherit at the resurrection. Though the church as church shouldn’t be doing politics, God’s people can and should. Bring the Word of God to bear on the ballot issues and on the positions of candidates. You are involved in the pollis (city) and the politics of the world though you look for a better, more permanent country.

Live by faith. Obey! Abraham obeyed by faith. He went, not knowing where he was going. By faith he looked for a permanent home, v.9. By faith he and Sarah had children, vv. 11,12. By faith he offered his son, v.17. Faith requires similar obedience of you. Faith includes active obedience, v. 17; James 2:20,21. Hebrews exhorts you to persevere in your confidence. You cannot separate faith from the life of obedience.

Trust God’s promises. You are to have faith, but faith in what? Abraham knew that the One who promised was faithful. He was looking for a city that God would provide, v.10. “Abraham’s life is quite comprehensive. His life can be interpreted as a survey of Israel’s history. He comes out of Ur to Canaan, descends into Egypt, returns through the Negev, separates from Lot, witnesses invasion by ‘Babylon’ and the restoration of the tribe.” (Charles G. Dennison, “Thoughts on the Covenant,” in Pressing Toward the Mark, p. 14). He and Sarah trusted God’s promise of children, v. 11. Through faith he had many descendants, v.12. By faith he saw the distant promises, v.13. Faith was the certainty of those promises, see v. 1. You, like Abraham, need to trust God’s promises. The original readers demanded immediate fulfillment. Their interest in eschatology was due to weak faith. Your inheritance is God himself–and the salvation that he gives. Your salvation is certain because God promised it by oath, Hebrews 6:13. Your salvation is certain because God has spoke in his Son. The faith of which Hebrews speaks is ultimately a trust in Christ. It is the acknowledgment of Christ’s work, and dependence on it. The principal part of saving faith, as the Westminster Confession of Faith puts it, is receiving and resting upon Christ alone. God is not ashamed of you, v.16. He is called your God. That is the heart of the covenant as he established it with Abraham. God has prepared a city for you. It is not that the heavenly riches are unreal, they are in a higher, and partly future, realm. You will receive them, as certainly as Abraham’s descendants received the inheritance God promised him.

Walk by faith–for that is how citizens of the heavenly country walk. Faith in Christ is the only way to reach the city God has prepared for you.