Judgment on a Fig Tree and on the Temple 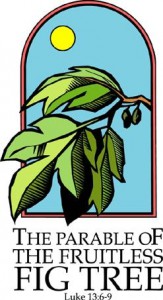 Jesus’ cursing of the fig tree in Mark 11:12-25 is his one “destructive” miracle, and, understandably, many have found it troubling.

If you are fruitless, you will be fruitless. Jesus came, he saw, he left. Verse 11 seems anticlimactic at the end of the Triumphal Entry. It serves as a transition drawing your attention to the action to follow. It points you to the Judge. Notice how Mark embeds the cleansing of the temple in the account of the judgment on the fig tree. Appreciate Mark’s time markers.

This miracle warns of God’s righteous judgment. This miracle is unusual in that it is a miracle of judgement or cursing. Most of Jesus’ miracles were beneficial, merciful acts. You dare not ignore Jesus as Judge. Don’t make him over in your own image. The withering of the fig tree is a visual warning to an unfaithful nation, to an unbelieving covenant people. Instead of being an arbitrary, unreasonable act, it is a visible sign of the state of the covenant people. The leaves were promising, but the tree was without fruit. It is judgment in visible form. “The withering of the fig tree . . . is a prophecy of the judgment that would overtake Israel on account of its barrenness. Viewed in this light this miracle is the counterpart of the saving miracles, and occupies an organic place in the scope of the preaching of the kingdom and in the totality of Jesus’ miracles.” (Herman Ridderbos, The Coming of the Kingdom, pp. 68-69).

God expects you to be fruitful. Old Testament Israel was warned of the covenant curse that would come upon faithless disobedience. The curse on rebellion is described in terms of crop failures, Deuteronomy 28:38-42. Israel in Jesus day was about to reject the Messiah, and judgment loomed on the horizon, Mark 13. Those who rejected the Messiah and plotted his death would fall under God’s covenant curse. Jesus warns you to be fruitful. You continue to be God’s covenant people. Jesus would soon warn his disciples that they had to be fruitful and abide in him, or they would be subject to pruning by the Father, John 15:1,2,5,6. Bear fruit. Bearing fruit means living as one united by faith to your Savior. It means displaying the fruit of the Spirit in your life. It includes all that you do to the glory of God.

The King brings judgment on the temple. Recognize the authority of the King. Jesus restores the temple to its purpose as a house of prayer, Isaiah 56:7; 1 Kings 8:30. As Jesus cleanses the temple he exercises divine authority. He is the messianic King. Submit to Jesus’ authority. Recognize his right to dispossess anything that replaces him as central, anything that corrupts the true worship of God. The Court of the Gentiles, though not specifically designed for them, was a place they could come to pray, see 1 Kings 8:41-43; Isaiah 56:7. Now it had been taken over by commerce. Jesus single-handedly drives out the merchants.

Out of the judgment on the temple comes a true house of prayer for all nations. The temple had become something that was the object of trust, even in the time of Jeremiah 7. But repeating the mantra would not stave off judgment. You dare not trust externals–your baptism, church membership, etc., are poor substitutes for trusting in Christ. The action in the temple, like his word to the fig tree, is an act of judgment. The cleansing does not appear to institute a reformation of worship. It was a temporary action. It does point to the proper use of the temple and to the judgment that would fall on Jerusalem and that temple. By his messianic death, which he would accomplish before the week was over, he would cleanse, not a magnificent building of stone, but the living temple of his people. Christians in Rome hearing Mark’s Gospel read could take comfort that as they prayed together, they truly had come to the temple. Hebrews 12 makes a similar point as to where you are located in worship. How does that affect the way you worship? Jesus takes the occasion of speaking about his curse of the fig tree to summon his disciples and you to faith. Similarly, driving out the traders from the temple points you to something much more permanent–himself as your Savior, and you, united with him, as a living temple. Look at a building more magnificent than Herod’s or Solomon’s temple. This temple is made of living stones. It is being built by the exalted Lord. He calls you to pray to him, to experience his power, and to join in praising his name.