Is God Fixing This? 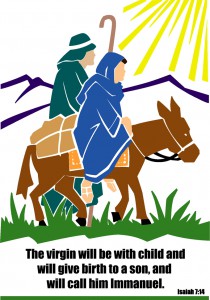 Last week, following the shootings in San Bernardino, a number of presidential candidates tweeted that their thoughts and prayers were with victims and their families. The New York Daily News placed images of some of those tweets around a huge headline in Thursday’s edition of the paper, reading “God Isn’t Fixing This.” The point of the editors was that instead of praying, these politicians should have been passing gun control legislation. This is not the place to get into the merits or demerits of more strict gun legislation. Rather, the point I am making is those who wrote the headline breathe the spirit of King Ahaz, reflected in Isaiah 7:14 and the surrounding verses. If you have a real problem, Ahaz and many of our contemporaries believe, you need not a sign from God or prayers to him. Rather, you need real action of some kind.

God has given you a sign. King Ahaz rejected God’s sign. It was about 730 B.C., and the kingdom of Judah was threatened by Pekah and Rezin, the kings of Israel and Aram. Ahaz, was frightened, despite the reminder in Isaiah 7:13 that he was the house of David, to whom God had promised a continuing kingdom. God, through Isaiah, assured him that the enemy kings would soon be removed, and commanded Ahaz to ask for a sign. The sign, the kind of which and location were left to Ahaz, would be an assurance that the Lord would not forget his promise. But, with an empty show of piety, Ahaz refused to ask for the sign. Ahaz, like much post-modern North American culture, has no place for signs from God or prayers when there are real problems to deal with—such as murders and attacks by apparent terrorists. Instead of trusting God’s covenant promises, he turned to an alliance with the pagan king of Assyria.

God himself gave a sign. Despite the refusal of Ahaz, God remains faithful. He gives a sign, not just to Ahaz, but to his people. God knew that Ahaz and the covenant people of Judah needed a sign. He knows that you and I need signs today. He has given those to us in baptism and the Lord’s Supper. It is not only the humanists who react negatively to signs. Too often, even within the church, the signs of the sacraments are taken too lightly. In dealing with this passage, Calvin expresses concern over attitudes in his day: “. . . the Lord offers to us in the gospel everything necessary for salvation; for when he brings us into a state of fellowship with Christ, the sum of all blessings is truly contained in him. What then is the use of Baptism and the Lord’s Supper? Must they be regarded as superfluous? Not at all; for any one who shall actually, and without flattery, acknowledge his weakness, of which all from the least to the greatest are conscious, will gladly avail himself of those aids for his support. . . . Let us therefore learn to embrace the signs along with the word, since it is not in the power of man to separate them.” (John Calvin, Commentary on the Prophet Isaiah at Isaiah 7:12). Scripture never minimizes our responsibility to act faithfully. But our action is meaningful only because God is acting.

The sign God gave through Isaiah was certain, though not immediately visible. A virgin would conceive and bear a son, and his name would be Immanuel. The time from infancy to weaning, the time it would take such a child to distinguish good from evil, would be the time within which deliverance would come. But along with deliverance from the current threat would come judgment in the form of the king of Assyria in whom Ahaz had put his confidence. He couldn’t trust God to solve his problem, but the solution to which he turned was an utter failure.

Look more closely at the content of the sign. God is with you. The Child was born of a virgin. Scripture upholds the fact that Christ was born of a virgin, and the church has confessed that through the ages—despite mocking attacks on that, both ancient and modern. Sometimes denials are blatant, other times more subtle, treating this as an important story that needs to be de-mytholigized. Even from within the church have come denials of this basic biblical teaching. In response to that kind of unbelief, J. Gresham Machen wrote: “. . . in the dealings of God with His covenant people will be found a profound and and supernatural promise of greater things to come. So, in our passage, the prophet, when he placed before the rebellious Ahaz that strange picture of the mother and child, was not merely promising deliverance to Judah in the period before a child then born should know how to refuse the evil and choose the good, but also, moved by the Spirit of God, was looking forward, as in a dim and mysterious vision, to the day when the true Immanuel, the mighty God and Prince of Peace, should lie as a little babe in a virgin’s arms.” (J. Gresham Machen, The Virgin Birth of Christ, p. 293).

The Child is Immanuel. The name, of course, is simply the Hebrew words for “God with us.” For Judah, that was reassurance. The God who had led them out of Egypt and into the promised land, who had promised a kingdom to David, would continue to be with his people. You understand more clearly that Isaiah’s contemporaries, even more clearly than the prophet, that this name means salvation for you. This is not an ordinary child. He is the God man, the Word made flesh. As you read on through the Book of Isaiah, the prophet details the suffering of the Servant as he deals, not just with enemy kings, but with the deeper problem of sin and Satan. There is forgiveness. The reference to this Child knowing good from evil takes you back to the scene in the Garden, Genesis 3. And it suggests the wisdom of a king. Thus, this Child is also the mighty ruler described in Isaiah 9. That is assurance, not only to Judah, but to you as well.

Does God fix things? He doesn’t necessarily fix them according our diagnosis of the problem, but he is not distant from you. In fact, in taking upon himself our human nature, he became Immanuel. That is the ultimate ground for hope.