Is God at Home in You? 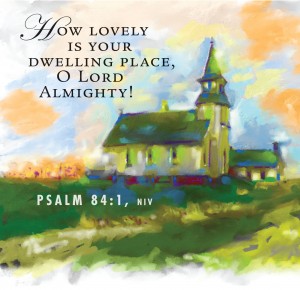 Where is God? Where is God at home? Where does he live? In heaven? Everywhere? In church? In you? All of the above have some truth in them. In John 14:15, 21-24 Jesus tells you that God makes his home in you!

For starters, remember that God is a Spirit. He does not have a body, which by definition has a location in space and time. He certainly lives in heaven, as the Psalms describe his dwelling place. But he is also present everywhere, as Psalm 139 reminds you. At particular times he comes to live among his people, showing his glory in the cloud and fire as Israel wandered through the desert. Later he filled the Tabernacle, the tent that symbolized his presence in the middle of the nomadic people. When Solomon built the Temple the glory of the Lord filled it, but Solomon recognized that if even the heavens could not contain God, much less could a temple made of stone and cedar covered with gold.

God does not have a body, but the message of John’s Gospel, shared by the rest of Scripture, is that at a particular point in human history the Son, the Second Person of the Trinity, became flesh and took upon himself our human nature. John 1 tells you that and hints at the display of God’s glory in him. But now, three years after beginning his public ministry, Jesus is showing his disciples what he came to do. He is going to the Father, but he will come again and take us with him. He is busy right now preparing a place for you, not only a temporary residence for your soul when you die, but he is subduing all things and is making the new heavens and earth. Eden restored and expanded is the picture John paints in Revelation 21 and 22.

Although Jesus speaks with some frequency of remaining or living with his disciples, take note of a noun used only twice in Scripture, in v. 2 of John 14 and again in v. 23. It is translated “rooms” in v. 2 and “home” or “dwelling” in v. 23. Grasp what Jesus is telling you. Not only is he making dwellings for you, but as the risen, ascended Lord he is working by his Spirit to make a dwellling for himself and the Father. That dwelling is you, his people. Both individually and together as the church you are the place where God makes his home! Sinclair Ferguson writes: “As Paraclete (1 Jn. 2:1), Christ makes a home for his people in the presence of the Father; as Paraclete, the Spirit makes a home for the Father and the Son in the believer, who becomes individually as well as ecclesiastically ‘a dwelling in which God lives by the Spirit’ (Eph. 2:22). The Spirit is the divine ‘home-maker’, unknown and unrecognized by the world (Jn. 14:17b), but effecting new life, growth, nourishment, and change within the family circle.” (The Holy Spirit, p. 187).

If the Father and the Son, working through the Holy Spirit, have made their home in you, that is going to impact how you live. In this Gospel John has spoken of God’s love for his people and your love for God. He now speaks of your loving him. Your love for Jesus is not just a feeling or emotion. It is obedience to his commandments. You cannot have a relationship with Jesus Christ and not keep his commandments. Beware of conclusions that suggest that the commandments are Old Testament, not New, or that the Old is law and the New is grace. Old and New alike include obedience to Christ’s commandments. After all, he did not come to abolish the law, but to fulfill it.

The statement, “you will keep my commandments” implies an imperative. You cannot love Jesus and not obey him. But the focus is on the indicative. Jesus, as we saw last week, is talking about coming to his disciples in the Holy Spirit, in the event of Pentecost. Approaching the house of God in the Old Testament involved ceremonial cleansings. Jesus has now given you the Holy Spirit, who reshapes you to his glory.

When Jesus says he will show himself to his disciples but not the world, Judas (not the betrayer) expresses puzzlement. You might expect that the risen Lord would stand before the multitudes once again. Wouldn’t that impress people and draw them to trust in him? Instead, Jesus focuses on your obedience and affirms that he and the Father will make you their dwelling.

Where does God make his home? In heaven? Yes. In every part of the universe? Yes. But most importantly he makes his home in you. That changes how you live. Because he loves you and you love him, keep his commandments!