I Am the Lord 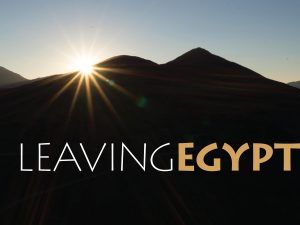 Troubles and suffering seem to overwhelm you. You may be trying to serve the Lord, but life keeps getting worse. How do you respond? Do you give up? Are you filled with doubt? In Exodus 6:1-12 God tells you simply, “I am the Lord.”

Beware of practical unbelief. Pharaoh scoffs, “Who is the Lord?” Moses and Aaron returned to Egypt at God’s command and brought the Israelites the message that the Lord had heard their cries and was about to deliver them. Their initial response was to worship the Lord (Ex. 431), but Pharaoh’s response was one of scorn. His question, “Who is the Lord?” sounds remarkably modern. We live in a culture that, if it thinks about God at all, tends to dismiss him as irrelevant. Pharaoh is hardening his heart, and the Lord is hardening it as well, so that the power of God will be displayed in the redemption he is about to bring. But, when those in authority have that attitude towards God, things tend to be difficult for his people. Paul reminds you in Romans 8 that your present existence is one of suffering.

Don’t let suffering make you doubt your Lord. Pharaoh, angered at the Lord’s command, as limited as it was—to allow Israel to travel into the desert for three days to hold a festival, increased the burden on his Israelite slaves. Mistreatment grew. Suffering expanded. When Moses brought the message of hope that we will look at in a moment, the discouragement of Israel was so great that they refused to listen to Moses. Particularly in times of suffering and opposition, be careful not to discount the faithfulness of God. Don’t let discouraging circumstances shift you from trust to doubting God. Beware of thinking that he cannot or will not work powerfully among those who trust him. Avoid Israel’s mistake of looking to some human power as the deliverer. “The reason this faith succumbed so quickly was that the people still looked to Pharaoh and valued his good will. They did not yet dare entrust themselves completely to the Lord, even though deliverance had to come through oppression. Sadly enough, this is often the attitude of the covenant people: again and again they look back.” (S. G. DeGraaf, Promise and Deliverance, Vol. 1, p. 266).

Trust your God who says, “I am the Lord.” The Lord’s name assures you of what he does. The Lord speaks to a discouraged Moses, and through him to his people. Notice the refrain, repeated four times: “I am the Lord!” He uses his covenant name, Yahweh, emphasizing his faithfulness to his people. The name, El-Shaddai, more typically used with the patriarchs, emphasizes his power. But Yahweh, the Lord, speaks of his covenantal faithfulness. The name focuses, not just on who God is I (I am who I am), but underscores what he does. He has remembered his people and heard their cries. They will be his people and he will be their God. He will redeem them. And he will certainly give them the promised land. “Jehovah, the absolute God, acting with unfettered liberty, was the very God to help [Israel] in their unworthiness as regards themselves, and in their impotence as regards the Egyptians.” (Geerhardus Vos, Biblical Theology, p. 134). The focus is not just on you and your needs. Rather, it is on your glorious, faithful God.

Your Savior is “I am.” Trust him! How relevant are these words spoken three and a half millenia ago? They are true enough that Jesus, the prophet greater than Moses, echoed them repeatedly, as John’s Gospel tells you. In his confrontation with the unbelieving leaders, Jesus claims, “Before Abraham was, I am.”

You cannot hear your God say, “I am the Lord,” and remain neutral. He summons you to commit yourself to him, and when you do, you find him utterly faithful.