Heir of the Righteousness of Faith 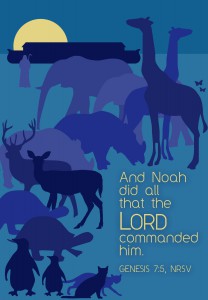 How bad is the world today? How does it compare to the evil in Noah’s day? Hebrews 11:7 summons you to walk in the fear of God and to inerit the blessing of righteousness.

By faith heed God’s warning. Beware of judgment yet unseen. God told Noah of coming judgment, and by faith he saw the future wrath. God still warns of coming judgment, Hebrews 10:25,27; 2 Peter 3. Like Noah, be motivated by fear. Too often men mock judgment, but God’s judgment is to be feared, though holy awe is not identical to terror. But notice the grace that shines through, even in the emphasis on wickedness in Noah’s day. Here is the first use of the word “grace” or “favor” in Scriptue.

By faith obey God’s command. Noah built the ark. It took faith to embark on that project! Noah trusted God’s way of salvation and the result was salvation for him and his house. The flood pictures judgment, 2 Peter 3:5-7. It is not so much a picture of judgment as it is a catastrophic anticipation in time of the final judgment. Yet the ark floating on the same flood shows salvation in Christ, 1 Peter 3:20,21. Hebrews is calling you to take hold of Christ. Your baptism fits into the picture, not only as a sign, which it is, but also as a means of grace. Noah’s story, like that of Abraham and Moses, calls you to be a pilgrim, choosing to imitate the godly in their walk of trusting obedience. “Noah paid such respect to the Word of God that he turned his eyes from the contemporary view of things and went in fear of the destruction which God threatened as though it were present to him. Therefore the faith which he had in the Word of God prepared him for obedience to God.” (John Calvin on Hebrews 11:7).

Inherit the righteousness of faith. Noah’s faith condemned the world. Noah was a preacher of righteousness. His words, his life, and his work were a witness for 100 years and left his generation without excuse. Imagine the faith it took to continue to do this, year after year! Your faith is a sign to the world. Your example warns those around you. Your words and your life are a testimony. For the world to ignore it is to be condemned.

Receive and proclaim the righteousness of faith. Noah’s righteousness was by faith. He found favor in God’s sight. His righteousness came by faith. Like Abel, righteousness sprang from a heart of faith. Like Enoch, it resulted in a life of faithful obedience. Receive this righteousness by faith. The term “heir” indicates that the righteousness is received, not earned. Noah received, not just a dry, safe place during the flood, but also righteousness, salvation, and fellowship with God. “. . . faith indeed properly comes from promises; . . .it is founded on them, and rests on them. Hence we say that Christ is the true goal of faith, for that in Him our heavenly Father is reconciled to us, and by Him all the promises of salvation are sealed and ratified. Yet there is nothing to hinder faith having regard to God and reverently receive whatever he says; or if you prefer it more shortly, it is the office of faith to hear God when He speaks and to accept without hesitation whatever comes from His sacred mouth. Faith is therefore subject to His commands and warnings no less than to His free promises. Since no one is ever moved to obey the commands of God, nor impelled by warnings to avert His wrath unless he has already grasped the promises of grace and acknowledges Him as loving Father, and Author of salvation, so the Gospel is called by synecdoche from its principle part, the Word of faith, and a mutual relationship is established between the one and the other. Although faith has reference directly to the promises of God it nonetheless has regard to His warnings so far as it is necessary for us to be brought up in the fear and obedience God.” (John Calvin on Hebrews 11:7). The righteousness which he and you receive is ultimately the righteousness of Christ, earned by his sinless life, his obedient suffering and death, and his powerful resurrection. You are an hear of this–by faith, as you trust in Christ.

For Noah, faith was the certainty of things unseen. Hebrews summons you to that same trust in the unseen Christ.