Healed by Faith in Jesus’ Name 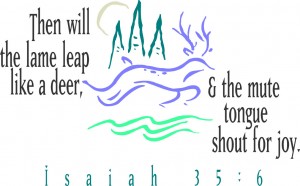 “What’s in a name?” asked Shakespeare. Although not something that prevented Romeo and Juliet from loving each other, the names Montague and Capulet were significant in the play. Far more significant is the name of the One in whose Name the lame beggar was healed, as Peter explains in Acts 3:16.

Trust in the name. Understand the name. Peter explains the miracle. Not only does God do something wonderful, but he also provides an explanation, an interpretation. Rather than power or godliness of their own, it was the name of Jesus that had healed the lame man. In the Bible, the name represents the person. Precisely because God is who he is, you must not take his name in vain. You are to hold him in reverence, recognizing his holiness and power. When Moses asked to see the glory of God, the Lord came down in the cloud and proclaimed his name, Exodus 34:5-7. In the New Testament Mary and Joseph are told the name to give to Jesus. Because of this don’t treat lightly the fact that you are called by his name: Christian! Dennis Johnson says: “Often in the Old Testament the name of the Lord is nothing less than his powerful presence with his people, openly proclaimed, so that they might place their hope and trust in the God who is with us. So also in Acts, Jesus name wields power to save, for it speaks of the presence of Jesus among people in need, calling the desperate and the weak to rest their faith in his strength and grace.” (The Message of Acts in the History of Redemption, p. 27).

Receive the blessing of the Servant. Why did this miracle (and others, see Acts 2:43) take place? What is the blessing of the one whom Peter repeatedly refers to as the Servant? Don’t make the mistake of thinking that Peter records this miracle to show you that God is going to give you whatever healing or blessing you claim. Tragically, one of America’s prominent religious exports to the third world is the health and wealth gospel—which is no gospel at all. The focus moves away from Christ and his work to the healer and his supposed miracles. Instead, Peter tells you, this miracle of healing (note that Dr. Luke describes specifically the feet and ankles that are healed) is the result of the exaltation of the Messiah. Isaiah 35 looked forward to the coming of the messianic kingdom. In it the lame would leap for joy. Peter, in effect is saying, “Look! That’s what has happened here!” This miracle, like the ones Jesus performed during his earthly ministry, are visible forms of the proclamation of the kingdom. It is a foretaste of the times of refreshing which the Servant brings about by his suffering, death, and resurrection. The kingdom Jesus established is here, ever since his resurrection and ascension. But it is also future. Times of refreshing is anticipated! Dennis Johnson writes: “Viewed against the background of prophetic promise, these early signs of Jesus’ power to rescue and repair by his Spirit reveal that the church’s life is now a first installment and preview of the peace, purity, love, and joy of the world to come, even in the midst of the old creation’s present pollution, decay, and death.” (p. 56).

You see the character of the work of the Messiah when Peter identifies him with the mysterious prophet like Moses. What is his importance? This miracle of healing is connected with the ultimate healing that God gives in drawing a person to himself. “Salvation in Luke-Acts can include physical healing (as in Acts 4:9 containing the same word . . . as that translated ‘saved’ in 4:12); but Jesus’ name—and this name alone—brings a deeper, more comprehensive restoration than merely a restoration to physical wholeness.” (The Message of Acts in the History of Redemption, p. 26). Peter’s message called his listeners, and Luke records it so that the Spirit can use it to call you, to repent and turn to God.

What’s in a name? When it is the name of Jesus Christ, life itself for all eternity!