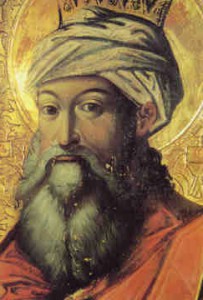 It is appropriate to honor fathers, especially godly fathers, on Father’s Day. If there is one man in the Bible to whom the title father belongs, it is Abraham. But Hebrews 7:1-10 points you to someone greater than father Abraham. He does this to show you the excellency of Jesus Christ, as your priest in matters related to God—particularly sin and its forgiveness. As the events in Charleston this week show, forgiveness is a very relevant issue.

Melchizedek’s glory exceeded that of Abraham. Abraham’s tithe showed his recognition of the greatness of Melchizedek. Abram tithed on the plunder he had captured in the war with the Mesopotamian kings. The tithe involves a joyful submission. The first 1/10th of the harvest belonged to the Lord, Leviticus 27:30, 32, and was to be used by the Levites and priests, Numbers 18:21,24,26. The tithe was not a burdensome tax, but a sign of joyful submission, of gratitude for what the Lord had done for his people, Malachi 3:9,10; 2 Corinthians 9:7. Giving the tithe is an admission that you belong to God, and that all you have, you have received from him. Significantly, Abraham tithed to Melchizedek, not just as a personal gesture, but was recognizing the priesthood, of which Melchizedek was a type.

The greatness of Melchizedek is seen in his blessing Abraham. Blessing and the tithe are tied together. In Malachi 3:10 the blessing follows the tithe. This is not a mechanical process, as the health and wealth heresy indicates. The greater person blesses the lesser, Hebrews 7:7. This was an authoritative blessing: Numbers 6:22; Isaac blessing Jacob, Jacob, his sons. If the tithe is, in a sense, an offering of oneself, a sign of submission, the blessing is the response of the sovereign. Thus, Melchizedek blessed Abraham. He did this as priest of the most high God. As a type of Christ, he was far superior to the patriarch, Abraham.

But what does all this history mean?

Jesus, your High Priest, is greater than any other. Even the priestly tribe was represented in Abraham’s tithe. The priests received tithes from their fellow Israelites, Hebrews 7:5. But Levi was represented by Abraham, Hebrews 7:9! Abraham was acting as an official representative of his descendants. What he did affected his heirs. (The abdication of a king affects his descendants.) Abraham’s submission to Melchizedek (through giving the tithe and receiving the blessing) involved the subordination of the Levitical priesthood to that of Melchizedek, Hebrews 7:6. Christ’s priesthood, like Melchizedek’s is far greater than any earthly line. The original readers needed to remember that as they tended to focus on the external and superficial. “In Christ, therefore, Abraham and Melchizedek meet again, and they not only meet, but as figures of the temporal and eternal orders, in him they are united into one eternal reality.” (Philip Edgcumbe Hughes, A Commentary on the Epistle to the Hebrews, p. 254).

Not only is your High Priest greater, he is eternal. In a passage that has given rise to many differing explanations, Hebrews describes Melchizedek as without parents or genealogy, thus a priest forever. “Melchizedek is not thought of here (as the phrase goes) in his private capacity, but as a sacred type of Christ. It must not be thought an omission either by accident or lack of thought that he is given no family connexion, and that there is no word of his death. The truth is that the Spirit has done this purposely so as to elevate him above the common herd of men.” (John Calvin on Hebrews 7:3). The Levitical priests die. They did have a God-given authority (as the tithe indicated), but they were only men, and thus were subject to death. The other Priest lives! He is declared to be living. Scripture is silent about the death of Melchizedek. Christ, both as person, and as priest, is eternal. How can you look to any other priest for your salvation?

The glory of Melchizedek, so great that Abraham offered tithes to him and received a blessing from him, is merely a type, a foreshadow of the glory of the Priest, Jesus Christ. He alone brings salvation. In him alone can you find forgiveness—and the grace to forgive.