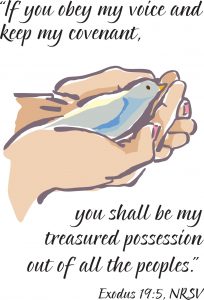 It is Valentine’s Day on Tuesday. Feelings are important. Do something special for your valentine! But, while you celebrate, remember that there is more than feelings involved. You live in a culture that is feeling-oriented. How I feel about myself, how I identify, supposedly determines who I am. Though our popular culture does not recognize it, there is something objective about you—you are made in the image of God. That gives you worth and value. And there is something objective that identifies us as God’s people—he has made his covenant with us. Although centuries earlier God had made his covenant with Abraham, from whom Israel descended (and you can look all the way back to Eden and find the substance of God entering into a covenant with our first parents), here in Exodus 19:3-6 God makes his covenant with his people, Israel. As we will see, this is not just historical trivia, but it is a specific instance of the covenant relationship God has with you, his people.

Look at what God has done. God carried Israel on eagles’ wings. God is going to give his law to Israel and make his covenant with them. But first God reminds his people what he has done for them. The indicative precedes the imperative. He defeated the oppressing Egyptians with the plagues. He brought his people through the sea. He fed them with bread from heaven and provided water from the rock. No wonder he describes his activity as carrying them with eagles’ wings! The Exodus is the redemptive event in the Old Testament. Israel is delivered as they trust in Moses, Exodus 19:9 and 1 Corinthians 10:1-2.

God has brought you to himself. As wonderful as God’s deliverance through Moses was, as powerful as were his actions against their enemies, he has done something far greater for you. He has delivered you, not from salvery in Egypt, but from bondage to sin, from death itself. Your deliverer is far greater than Moses, he is the Son of God himself! And, as with Israel, he does not redeem you and leave you on your own. He sustains you and calls you to live in fellowship with him.

Keep God’s covenant. God has made his covenant with you. When the infinite Creator condescends to have fellowship with his creature, made in his image, it involves the Creator condescending, coming down to our level. He enters into a covenant, a bond of mutual fellowship. It involves us worshiping and committing to our God. There are consequences for breaking the covenant, and rewards for maintaining it. Unlike a human contract, God is the one who establishes the covenant. But it is not just a decree—it involves response and commitment by us, his people. The original covenant in Eden involved the principle of works. Adam failed, involving us in his fall. But then God establishes his covenant of grace, in and through his Son. There is a great emphasis on the requirements in this covenant at Sinai, but at heart it is God saying, I am your God and you are my people.

Keep God’s covenant! The next chapters describe the stipulations, the requirements of the covenant. The sealing of it is found in Exodus 24. God summons you, like Israel, to commit yourself to him. And you can do that only because you have one greater than Moses in whom you trust. 1 Peter 2 emphasizes the grace and mercy you have received in Christ. You are God’s people, not because of what you have done, but because of his work. “Genesis 3:15 already contains the entire covenant in a nutshell and all the benefits of grace. God breaks the first covenant made by the first humans with Satan, puts enmity between them, brings the first humans over to his side, and promises them victory over the power of the enemy. The one great promise to Abraham is ‘I will be your God, and you and your descendants will be my people’ (Gen. 17:8 paraphrase). And this is the principle content of God’s covenant with Israel as well. God is Israel’s God, and Israel is his people (Exod. 19:6; 29:46; etc.). Israel, accordingly, receives a wide assortment of blessings, not only temporal blessings, such as the land of Canaan, fruitfulness in marriage, a long life, prosperity, plus victory over its enemies, but also spiritual and eternal blessings, such as God’s dwelling among them (Exod. 29:45; Lev. 24:12), the forgiveness of sins (Exod. 20:6; 34:7; Num. 14:18; Deut 4:31; Pss. 32; 103; etc.), sonship. . . sanctification. . . and so on.” (Herman Bavinck, Reformed Dogmatics, Vol. 3, p. 221).

Live as God’s treasured possession. How precious are you to God? Precious enough that he gave his Son to die and rise for you in order to draw you to himself. Be a kingdom of priests. A priest represents people to God and presents God to the people. Moses functioned in that capacity, as did Aaron, who was made high priest. But if the nation is a kingdom of priests, whom do they present to God? To whom do they proclaim God? Israel, though failing to live up to it, had the responsibility of being God’s representative to the peoples around them. “In Exod. 19:6 God says to Israel, ‘You shall be to me a kingdom of priests,’ which likely meant that as a whole nation they were to serve as kingly mediators of divine revelation between God and the unbelieving nations (see also Isa. 43:10-13). They were not faithful in this witnessing task. Therefore God raises up a new priest-king, Jesus, and those identified with him are a ‘kingdom of priests,’ as expressed by 1 Pet. 2:9; Rev. 1:6; 5:10, which clearly allude to Exod. 19:6.” (G. K. Beale, A New Testament Biblical Theology, p. 678). Peter, as he quotes this passage, makes clear that you have continuing obligation to present God to the world around you.

Be a holy nation. Israel was preparing to hear God’s voice. They had to be set aside as belonging to God. They set aside normal activities, even marital relations. They washed themselves. God was going to speak to them. You have been cleansed by Christ, and you now live as a holy people, set apart to serve him. Being God’s people is not just a matter of feelings. He has made you his people. He calls you to live that way. God’s holy nation today is not a country in the Middle East, but his redeemed people called out from every tribe and nation.

No wonder that Peter, seeing the church as the new people of God, calls you to praise him. Live as a royal priesthood, offering yourselves as a thank offering to God. You are a holy nation. Remember that you are set apart to God–and your life has to look like it.