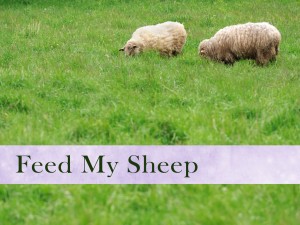 Peter had already been forgiven. His offense, of course, had been the triple denial of his Lord, John 18:15-18, 25-27. This had followed his boast that he would never deny his Lord, John 13:37 (Mark 14:29). By the time of the picnic breakfast on the lake, Jesus had already appeared to Peter, Luke 24:33,34; 1 Corinthians 15:3-5. Likely the meeting included Peter’s confession of his sin and the Lord granting forgiveness. Forgiveness is a matter between you and God [and the person(s) sinned against if there are such]. You need no priest other than your great High Priest, Jesus Christ. But the denial had become public knowledge. Did that disqualify Peter from his position among the 12?

In Peter’s triple confession Jesus restored Peter. The aroma of the charcoal fire must have brought to Peter’s mind the fire in the courtyard of the high priest, the setting of the denials. Three times Jesus asks Peter, “Do you love me?” Although John records Jesus’ words using two different words for “love,” agapao and phileo, John probably uses them synonymously. Peter rests his response in the omniscience of the Savior. The triple question along with their answers and the instructions to Peter, make clear that he is to resume his role as an apostle. The crucial question for Peter, if he is to serve as an apostle, comes from Jesus: “Do you love me” That is the most important question for those who would, like Peter, serve as elders: do you love Jesus? And because the work of the elders involves modeling and leading the flock, the question comes to each of you as well. The account challenges you to examine your heart and confess your love for the Savior.

What’s Peter to do, now that he is restored? And what is the work of the church, which would be built by Peter and the other apostles? Each time the question and answer is followed by an admonition. The sheep, both the mature ones and the little lambs, are to cared for and fed. Essential to the work of apostles, and by implication to those who follow in their steps as elders is loving care for the sheep. Notice how Peter relates his role, and those of fellow elders, to that of the Chief Shepherd, 1 Peter 5:1-4. Appreciate how pervasive the shepherd/sheep imagery is throughout both Testaments (including in our reading in Ezekiel 34).

Although feeding the flock is the special responsibility of the elders, there are ways in which every believer has a responsibility in that area. Parents, read and pray with your children. Fathers, lead family devotions. Encourage one another in the faith. The gifts of encouragement and intercessory prayer do not require ordination!

Jesus forgives your sin as he forgave Peter’s. But he does not leave you wallowing in the question, “Can I still serve?” He summons you to care for the sheep. The sheep are important because they belong to Jesus. Keep that in mind when you become frustrated with the rest of the flock.

What do you need in order to do this? The closing command recorded in this Gospel recalls the first chapter, where also the disciples followed Jesus. The command comes to you as much as it did to Peter. And obedience may be costly. Jesus foretold the martyr’s death by which Peter would glorify the Lord. Your following Jesus involves being united with him in his suffering as well as in his glory. “He [Peter] is now asked to to follow Jesus on a road that Jesus has traveled first and alone and on which he as the great Shepherd of the sheep, has given his life. Now the time has come for Peter to tend the sheep. The risks of following have not diminished. But the way Peter must go has been pioneered: as his Lord’s follower and as shepherd of his Lord’s sheep he will be not only a participant in his Lord’s death but also a witness to and participant in his Lord’s resurrection.” (Herman Ridderbos: The Gospel of John: A Theological Commentary, p. 668).

Christ died to forgive you. The risen Savior summons you to follow him. Do you love him?