Do you see what Abraham saw? 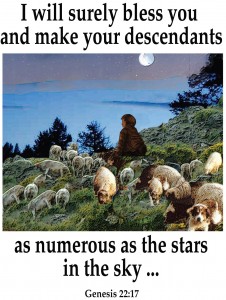 There is no better way to get to know the Lord Jesus Christ than to listen to him. In John 8:48-59, using compressed, condensed language, he tells you who he really is. As you listen to him notice how references to Abraham are intertwined with the theme of God’s glory. If you want to glorify God you have to know him in his Son.

A basic truth becomes evident–you cannot remain neutral about Jesus Christ. Jesus had pointed out that those opposing him were really children of the devil, the one who was a liar and murderer from the beginning. His opponents, who were seeking his death, accused him of being a Samaritan and being possessed by a demon. Jesus ignores the first accusation and responds to the second by affirming that instead of seeking his own glory, his Father, the judge, seeks his glory. The lines are drawn. Either you join in the Father glorifying the Son (by keeping the word of Jesus, which means you ultimately never see death), or you side with the powers of darkness. There is no neutrality. It is darkness or light, life or death.

The response of the opponents is that even Abraham died. How can Jesus claim to give life to his followers? Jesus again emphasizes that the Father glorifies him. Then he makes a wonderful statement, “Abraham rejoiced to see my day. He saw it, and was glad.” The leaders of Israel failed to grasp the flow of the history of redemption, the way that God has entered our world and, step by step, accomplished our salvation. Instead they focused on the law as their means of salvation. If only they were careful enough in obedience, then God must look on them with his favor. But Jesus affirms that Abraham saw (past tense) his day and rejoiced in it. He doesn’t specify which events in Abraham’s life he has in view, perhaps because Abraham’s walk of faithful, trusting obedience in its entirely was a joyful faith in the coming Messiah. It included Abraham taking hold of God’s promise that in him all the nations of the world were to be blessed. As Abraham and Sarah became parents (not by way of a virgin birth, but by wonderful miracle for the aged couple) they saw by faith the coming of a greater descendant. As Abraham offered teen-aged Isaac on an altar, and then had him spared because the Lord provided a substitute, Abraham rejoiced in the day of Jesus. Jesus’ reference to Abraham rejoicing to see his day challenges you to see the Scriptures the way that Jesus does.

One more exchange–the opponents challenge Jesus that as a young man, not yet 50, he could not have seen Abraham, who had lived nearly 2,000 years earlier. Jesus responds with the words that form the high point of the discussion that runs through John 8: “I tell you the truth, before Abraham was, I am!” Do you remember that in John 1 we were told that in the Word we have seen the glory of the Father? Here Jesus uses that great covenant name by which God identifies himself (as he did to Moses at the burning bush), I Am who I Am.

Do you grasp the sweep of Jesus’ claim? All that Jahweh is, Jesus is. His opponents understand. They pick up stones to execute him for blasphemy. Of course they fail. The life of Jesus cannot be taken from him. In due time he will lay it down of his own accord. John records that Jesus left the temple grounds. Persist in rejecting Jesus, persist in refusing to receive him on his terms, and he will leave. And that is the beginning of judgment.

John has recorded this claim of Jesus so that you are confronted by it, so that you can turn to the Savior in faith, so that you can join in the Father’s glorifying Jesus. Remember that the Father sent his Son into this world to redeem every last one of his people. Your turning from darkness to the Light brings glory to the Lord. It also challenges you to love and worship God, not for your sake, but for his. Is your focus on yourself, your wants, your desires (I am), or on the One who identifies himself as “I am!”? I am or I Am?

Although G. K. Beale in the following is not commenting on this passage in John specifically, his words are relevant to the them of glory which Jesus emphasizes:

“Since God’s glory is the grand end-time goal of the redemptive historical storyline, we may conclude that the goal of God in everything is to glorify himself and enjoy that glory forever. Since this is God’s goal, so should it be ours. Thus, the chief end of humanity is to glorify God by enjoying him forever. If this is so, all people must ask themselves these questions: ‘In all that I think, say, and do, do I glorify God or myself?’ and, ‘Do I enjoy myself and the creation more than I enjoy God?’ Thus, biblical theology, as I understand it, presents to us the imperative not only to extend his kingdom of the new creation but also to love and worship God for his glory.” (A New Testament Biblical Theology, p. 961).