Displaying and Doing the Work of God 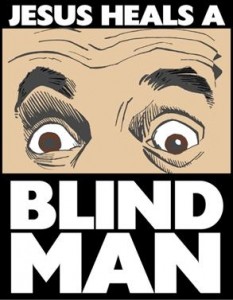 Have you noticed that sometimes people seem to assume that a person dealing with a handicap really can’t hear? The theological speculation of the disciples about the man born blind (John 9) ignores him and his need—but not so, Jesus!

See the work of God displayed. As with many theological errors, the disciples do grasp an element of truth. There is a connection between sin and the suffering that we endure. However, to assume that a specific sin lies behind every serious tribulation is to fall into the error of Job’s comforters. The beggar’s blindness was the result neither of his sin nor his parents’, Jesus said. Without exhausting questions about the origin of evil and how God includes all things in his plan, Jesus, rather than looking back, points forward. This blindness is so that the work of God might be displayed in his life.

Those words have been comforting to countless parents of special needs children, who have come to see God do his work in wonderful ways through their children. The grace of God is displayed at times through healing. In other situations the grace is evident in giving the strength to meet daily needs. The principle is a broad one. Whatever challenges you face this week as you live in a sin-cursed world where problems and suffering abound, look for the work of God to be displayed in what you do.

Jesus proceeds to display the healing grace of God in this man. Mixing saliva may sound off putting to our sense of sanitation. By the use of this means Jesus is drawing the man’s attention to himself as healer and calling him to exercise obedient faith by going to the pool of Siloam and washing his eyes. John provides the meaning of the name, thus underlining Jesus’ repeated emphasis in John 8 (and in v. 4 of this chapter) that he is the one sent by the Father.

As the man is healed Jesus is not just performing a random act of kindness. Rather, he is identifying himself as the sight-restoring messianic Servant of the Lord of Isaiah 42:7. The work of God is displayed not only in the healing of the blind man, but in the person of Jesus himself. The interchange later in the chapter between the blind man and the leaders of Israel as well as between the man and Jesus emphasize who Jesus really is.

In addition to speaking of God displaying his work, Jesus summons his disciples, then and now, to do the work of God: “It is necessary for us to do the work of him who sent me, while it is still day” (John 9:4). He is the unique Savior sent by the Father. But he calls you, his church, to join him in doing the work of his Father.

Herman Ridderbos comments: “The fact that ‘us’ occupies such an emphatic position apparently means that —  whatever may occupy others and whatever questions the disciples themselves may have with respect to God’s governance of the world — for them doing the works of him who sent Jesus is the great command of the hour.”

Jesus heals the man born blind. Then, as you read later in the chapter, he calls him to believe in the Son of Man. As John records this incident in his Gospel, he recognizes that Jesus summoned his disciples and the church that would be built through their work, to join in doing the work of the Father. Certainly that includes making the name and saving work of Jesus known. But it also includes obedient service in your daily life.

Jesus’ contrast between day and night gives an urgency to his work as well as yours. As in John 8:12, Jesus again speaks of himself as the light of the world. This time there is a growing time urgency (see also John 12:35). Jesus is aware that the time for his earthly ministry is limited, and he is moving closer to his arrest, crucifixion, and resurrection.

Similarly we, who live between his first and second comings, need to be aware of the coming day of judgment, of the limited time God has given us to serve him. If your eyes have been opened by Jesus, if you are walking in the light of the restorer of sight to the blind, now is the time to be busy about serving him. There are eternal consequences to what you do each day.