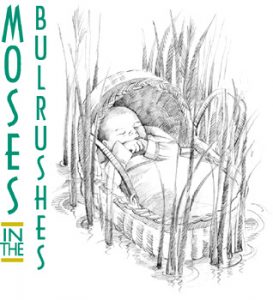 By faith Jochebed kept alive the future deliverer. Jochebed, not mentioned by name until Exodus 6, recognized something beautiful about her boy, see Exodus 2:2; Acts 7:20. Certainly Moses was not the only handsome baby born in Goshen. Nor was Jochebed the only mother to think her son was beautiful. More is going on here—she and her husband have some kind of recognition, some kind of trust, that in their son God is going to prove faithful to his people. They acted in faith. More is going on here than maternal instincts. Thus she hid the baby, then resorted to the ark. Miriam, apparently a young teenager, not only watches over her brother, but has the wisdom to speak to the princess at the right moment and suggest a Hebrew nurse for the baby. Jochebed may not have know all that her son would do, but she did know that it was wrong to kill her baby. Instead of fearing the king, she obeyed God. Trust, faith, gives you to strength to follow God boldly.

God shows you his faithfulness. Your God delivers in surprising ways. The basket into which Jochebed places her son is called by the same name as the boat God had commanded Noah to build. The use of the same term creates an expectation that the Lord will provide deliverance and comfort. Although you might expect the daughter of the king who ordered the baby boys drowned to report this disobedience, instead she has pity on him. She not only preserves his life, she adopts him. Some have suggested that the princess was Hatshepsut, who became a powerful queen in Egypt. “God’s providence used used natural factors: motherly love, sisterly love, a woman’s pity, Israelite acumen, Egyptian culture. It also used faith. It was precisely the commandment to throw the boys into the Nile that brought Moses to the Egyptian court!” (W. H. Gispen, Exodus, p. 38). Moses would be reared in Pharaoh’s court, the Lord using the palace of the oppressor to provide the future deliverer of his people with the best education of the day. But, before that, he spent his first few years, until he was weaned, in the home of the godly, faithful Amram and Jochebed, receiving training that resulted in his never losing his sense of identity as one of the Israelites.

In Christ, God will never abandon you. As God’s people, we do need to be prepared to suffer. But suffering is not the end of the story. God raised up Moses, not just to save the life of this baby, but to provide one who would deliver his people. The name, Moses, was probably a pun, not only in Hebrew (sounding like “drawn out,”), but also in Egyptian (representing “son” and possibly “lake” or “water”). In any case, God was preparing to bring deliverance to his people.Moses would be the great mediator, Deuteronomy 18:15, anticipating the greater prophet like Moses.