Cloud and Sea, Life and Death 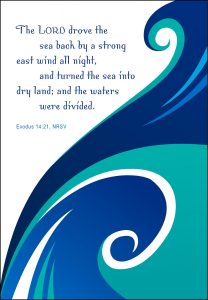 How can you be sure that God is with you? For Israel, as recorded in Exodus 14, it was clear: by day look for a pillar of cloud, at night, a pillar of fire. It represented the glory of the Lord, and demonstrated that he was with his people. As Paul tells you, however, these events have a bearing on your life.

The Lord appears in the glory-cloud. The pillar of cloud and fire was the presence of the Lord with his people. The cloud is not just a meteorological oddity. Rather, it is a visible manifestation of the presence of the covenant God with his people. On a smaller scale the Angel of the Lord had spoken to Moses from the burning bush. Now the Lord provides shade from the desert sun and light for his people at night. More than that, the pillar moves to guide his people through the wilderness. The Lord does not simply point his people towards the promised land—he accompanies them, he leads them. Isaiah saw the glory of the Lord fill the temple, and John tells you that Isaiah saw Christ’s glory and spoke of him, John 12:41. The Word reveals the glory of the Father. That glory was present in symbolic form as the cloud led the people. In his mysterious way he does not take them on the direct route, but rather leads them through the wilderness and into what seems to be a tactical mistake.

The Lord interposes himself between his people and their enemies. You might have thought that Egypt had been devastated by the plagues, especially the last one. But Pharaoh again hardens his heart and has second thoughts about letting his slave nation go. The army pursues, and soon has Israel trapped between the sea and the Egyptians. The people cry out in fear, but Moses assures them that they simply need to stand firm and see the deliverance the Lord will provide. The cloud makes a unique move—it shifts to between Israel and the pursuing army, forming a barrier, dark on Egypt’s side, but burning bright on the other to give light to God’s people. Your God places himself between you and your enemies!

Pass through death to life. The sea of death threatens you. The Red Sea, or the Sea of Reeds, is more than an unfriendly barrier to Israel. In the ancient world the sea was a place of chaos and destruction, as Jonah’s prayer indicates. The sea was an unfriendly place. It recalled the judgment of the flood.

The Lord brings you safely through.

He brings judgment on his and your enemies. The Lord doe not leave his people trapped. He has Moses stretch out his staff over the sea—and the strong east wind opens up a path through the water. Remember that the Hebrew word for wind is also the word for spirit. Think back to the account of creation, when the Spirit hovered over the unformed waters. You might describe some of the plagues as acts of de-creation. Now the Spirit of God opens a way of deliverance, and the nation of Israel passes safely through. The Egyptian army follows—and when Moses holds out his staff again, the waters come together and the enemy is drowned. The army of Pharaoh perishes. The Lord does battle and gains the victory for his people. That calls for celebration, as the next chapter indicates. “Yahweh God demonstrated his lordship over the cosmic kingdom as he, administering his creation covenant, gave constant assurance of his presence, provided protection from the sun by day and light by night, and gave guidance on a way not known by to the freed slaves. As the Israelites journey or stayed in camp, they had the constant assurance of the covenant Immanuel principle: God is with us. . . . Every Egyptian pursuing them and causing terror would be wiped away for all time. The Israelites had but to trust and obey. Yahweh God would carry out his purposes: defeat, humble, and incapacitate the enemy and deliver his chosen people from their bondage and from any threat of reoccurrence under Egyptian power and authority.” (Gerard Van Groningen, From Creation to Consummation, pp. 304-305).

Follow the Lord of glory! Trust the Lord into whom you have been baptized. As Paul calls the church at Corinth to live as those united to Christ, he recalls this piece of the history of Israel. Despite the contrasts of situyation and culture, Israel in the desert is relevant for both urbane Corinth and the contemporary church. As Israel was united to their deliverer, Moses, they experience the mighty acts of God on their behalf. At the heart of the sacrament of baptism, even deeper than the symbolism of washing and cleansing, is the idea of union and fellowship. Israel was baptized into Moses in the cloud and in the sea. You have been baptized into Christ. You belong to him. “Just as in baptism an intimate relation is established between the believer and Christ, based on the saviorship of Christ, even so the mighty acts of divine deliverance wrought through Moses pledged Israel to faith in him. And, as during the ministry of Jesus faith and unbelief proved the two decisive factors, so during the wilderness journey a great drama of faith and unbelief was enacted, deciding the people’s fate (Heb. 3, 4).” Geerhardus Vos, Biblical Theology, p. 119).

Follow him. As Israel was to follow the cloud, your life of faith means trusting in, following the Lord Jesus Christ. It means turning away from sin. It means entrusting yourself to your Savior. What happened to Israel was written down as an example for you.

How do you know that God is with you? Not because you can see a temporary pillar of cloud and fire. Rather, you have the very presence of the Lord of glory, and you, his church, have been baptized into him.