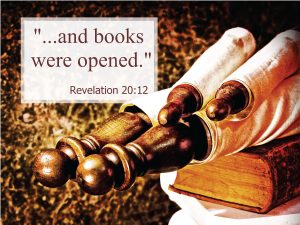 “The big one is coming. We all know that. We also know the big one might turn out to be the very big one. The 700-mile-long Cascadia subduction zone that’s just off the coast of California, Oregon and Washington will, sooner or later, produce a mammoth earthquake, scientists say.” So writes Douglas Perry in the Oregonian last Friday. Historically, the big one has come at roughly 300–500 year intervals, and the last big one was in 1700. Telling people it is coming (8.7 to 9.2 on the Richter scale) is one thing. Getting us to take some kind of action is another. It may happen soon, or it may not happen until you have been dead and buried for a couple hundred years—in which case you likely will not notice. In Revelation 20:11–15 John writes of an event that will most certainly happen, though we do not know when. And it will involve, not only the living, but also the dead—every single person who has ever lived will stand before God’s throne.

Judgment is coming. The day of judgment will be terrifying. You’ve seen cycles in the Book of Revelation, with peaks that describe the last day, though this gives more detail. Look back at Revelation 6:12–17 (notice people asking the mountains to fall on them to hide them from the wrath of the Lamb); 11:15–19 (focusing on the triumph of the kingdom of God); 16:17–21 (the last judgment was foreshadowed by the plagues of Egypt); and the fall of Babylon in Revelation 18. Here in Revelation 20:11, the earth and sky, instead of providing some kind of cover, flee from the presence of the Judge. The force of that is emphasized by the frequency with which the heavens and earth are called as witnesses in the Old Testament.

Judgment will be according to the books—the record of what people have done. Don’t think of a published book with multiple copies, but rather, a scroll (see Revelation 5:1), made, as all books of the day were made, by writing by hand. The picture draws on the courtroom scene of Daniel 7:10. And the language is symbolic. God does not need a written (or computerized) record to know what we have done. His memory is infinite and perfect. He does know all that you and everyone else has done. While it is true that, positively, your name is written in the Lamb’s book of life from before the foundation of the world, judgment is never based simply on the fact that God has not chosen some for everlasting life. Condemnation and eternal punishment is always based on sin. You and I cringe at that kind of record—but that is the evidence against all of those who are enemies of God.

Eternal punishment is in store for rebels against God. The lake of fire, eternal judgment, the second death, is the wages of sin. Some question the idea of eternal punishment, asking if it fits God’s character. Beware of trying to be wiser, or kinder, than God. The final judgment does reveal the wrath of God—and that should frighten you. But it also displays the goodness of God—he refuses to allow sin to go unpunished. Here is his response to suffering, persecuted saints. “Injustice and suffering never escape God’s eye. Those who persecute and those who practice injustice can never win. God will judge every deed, all wrongs will be righted, and all attempts to dethrone God and enthrone oneself will be completely frustrated. The prospect of final judgment ought to be a terror to God’s enemies and a fountain of assurance to the saints.” (Vern S. Poythress, The Returning King, pp. 162–163).

Be sure that your name is written in the Lamb’s book of life! Only those whose names are written in the book of life escape punishment. The focus of our text is on the judgment—but it does explicitly point you to a crucial exception to those being judged. Those whose names are written in the book of life are spared from judgment. Their situation will be described in more detail in the next two chapters, and those chapters contain a brief reference to those judged. The book of life has been described more specifically as the book of life of the Lamb, Revelation 13:8 and 17:8. The idea is as old as Moses on Mount Sinai, interceding for Israel after they worship the golden calf, Exodus 32:32. It is found in Daniel 12:1–2, where the Lord brings deliverance, eternal deliverance, to his people.

Your name is written in the Lamb’s book of life because he obeyed in your place. Don’t think of the books as a ledger, where your evil deeds are recorded in one, and your good deeds in another. Rather, as earlier mentions of the book of life make clear, if your name is there, it was written before the creation of the world, long before you did anything good or evil. If the Lord were keeping track of the sins of his people, there would be plenty to fill multiple books. But he has blotted out your transgressions, he has removed them as far as the east is from the west. Your sins are blotted out because of the Lamb who was slain. He suffered all the punishment that you deserve. Your name is in the book of life because he was slain. “The ‘life’ granted the saints in association with the book comes from their identification with the Lamb’s righteous deeds, and especially his death, which means likewise that they are identified with his resurrection. . . . The Lamb acknowledges before God all who are written in the book. . . .” (G. K. Beale, The Book of Revelation, p. 1037). You cannot write your own name in the book of life. But those whose names are written there are those who trust and serve him during this life. There is certain hope for you as you are in Christ.

Is it important to prepare for the big one? Yes. But it is absolutely crucial to be ready to face God on the day of judgment—for you will stand before him on that day. Will it be with your sins being read from the opened books? Or is your name written in the book of life of the Lamb, and this covered by his death and his obedience in your place?