And He Will Reign For Ever and Ever 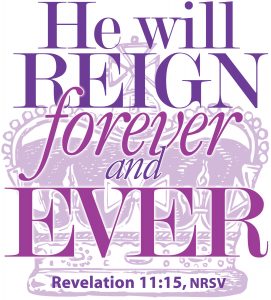 Six trumpets have sounded. With each there is an unfolding of some act of judgment that God brings on a rebellious earth. Now the seventh and last trumpet sounds. Here you see, not just God’s final act of judgment, but also the joy that results from the triumph of his kingdom.

Thank God that his judgment has come. Listen to the sound of the seventh (and last) trumpet. When the trumpet sounds, great voices from heaven break out in praise. God has accomplished his work. As each of the seven seals were broken aspects of God carrying out his will were revealed. Similarly, each trumpet has unfolded part of God’s plan. Both conclude with the final judgment and the glory that follows. At first glance it may seem strange to have joyful praise and judgment intermingled—but remember that the triumph of God’s kingdom means justice for the martyrs and for all of God’s people who have suffered. It means, and later in the book this will be explicit, Satan, the ultimate rebel against God and the enemy of his people, will be cast out.

Judgment arrives. Remember your Bible stories? When did you have seven trumpets and the ark of the covenant? As Israel entered the promised land the first city they encountered, Jericho, near the Jordan, had its walls breached as the silent army marched around it, forming a vanguard and a rear guard for seven priests blowing ram’s horns, followed by priests carrying the ark of the covenant. On the seventh day, after seven circlings of the city, the people shouted, the walls collapsed, and at God’s command the inhabitants were killed (except for believing Rahab and her family), and everything in it was burned. “The seven trumpets of God, like those at Jericho, have gone before the ark of his covenant and shattered all resistance to the establishment of his dominion in the earth.” (Dennis E. Johnson, Triumph of the Lamb, p. 154). Canaan had been idolatrous in Abraham’s day, but the iniquity of the Amorites was not yet full. God’s judgment through the Israelites was an anticipation in time of the final wrath of God. Revelation 11:18 also echoes Psalm 2, with the kings of the earth shaking their fists against God. The Lord laughs. None can withstand the Lord when he comes in judgment. Death itself does not hide you from the wrath of the Lamb. The dead, as well and the living, are judged. Yet, the focus is positive.

Your eternal Lord reigns for ever and ever. Your God is eternal. Throughout Scripture, but especially in Revelation, the difference between Creator and creature is underlined by describing God as eternal. You, who trust in Christ, have eternal life. Yet, the word is used differently when applied to us. We each had a beginning. Our life will go on without ending. But God is above time, outside of time. He created time. Yet, because he is above time, he is also active in it, accomplishing his purposes, bringing salvation to his people, and building his kingdom. “The God who transcends time guides the entire course of history because he not only stands as sovereign over its beginning and end, but is also in its midst, invisibly guiding it.” (G. K. Beale, The Book of Revelation, p. 613). In Revelation 1:4 God is the one who was, who is, and is to come, echoed in the hymn of Revelation 4:8. Notice the difference in Revelation 11:17. He is the sovereign Lord who was and who is. But the phrase you might expect, “and is to come,” is replaced by his assuming power and reigning. At this point he has come. He has completed his work of redemption and has brought his people and the creation into consummation.

His kingdom has come. The Old Testament is the account of the establishment of God’s kingdom, not in ints final form, but in a preliminary way, pointing to something greater. Much of the teaching of Jesus focused on the coming of the kingdom, which came because the King was present. Although the terms are different in the Epistles, Paul contrasts this present evil age with the age to come. Every time you pray the Lord’s Prayer, you pray for the coming of God’s kingdom. The souls of the martyrs under the altar had cried out, “How long?” Now you have the fulfillment, not just of their prayers, but of yours as well. All evil is judged and put down. Sickness, death, and mourning are gone. God’s kingdom has come! That’s good news!

See the ark of God’s covenant! The ark was at the heart of God’s covenant relationship with his people. Significantly, this temple is in heaven. This is the reality that God showed Moses on Mount Sinai, and which the tabernacle built on earth represented, as Hebrews reminds you. The ark in the tabernacle was the center around which Israel in the wilderness camped. The cover of the ark was the mercy seat, the atonement cover. Once a year the high priest sprinkled blood and he symbolically atoned for the sin of God’s people. What that pictured was the reality of the work of Christ. Though Christ accomplished the salvation of his people some 2,00 years ago, the final day has not yet come, because he is still bringing in those the Father has given him. But in the still future scene pictured at the sounding of the seventh trumpet, all of that has been finished. Christ will have destroyed all dominion and power and will have given the kingdom to his Father, 1 Corinthians 15:24. That image of the heavenly temple will be expanded upon later in Revelation.

You are in the presence of the holy God. Remember that the ark, for all its golden magnificence, was not on display. It was hidden in the darkness of the most holy place. A cloud of incense helped to hide it. Numbers 4 describes how, even when the Tabernacle was dismantled for moving, the priest had to cover the ark lest anyone see it. They were warned that they could die if they touched the holy things. 2 Samuel 6 records how Uzzah reached out to steady the ark as it was being transported by ox cart—and died. God is a holy God, and he calls you to reflect his character. You may not live simply according to your own desires and impulses. Ask at each point how you are reflecting the holiness of your God. Remember the ark, accompanied by seven priests sounding trumpets? The fall of Jericho indicated what God was doing. The wickedness of Canaan was being conquered and destroyed. The worship of idols would be replace by worship and service of the true and living God. The land where God would cause his name to dwell, where eventually the temple would be build to house the ark, that land was being cleansed of wickedness. The judgment that came upon Canaan is what you and I deserve. We cannot stand in the presence of a holy God. But, because Christ has borne that ultimate judgment in your place, you, like John, are in a position to look at that most holy of all things, the ark of the covenant. Fellowship with God has been restored. It’s imperfect in your life and mine—but in the fullness of the kingdom of God all of your sin will be done away with. You will be able to see the ark—and live.

“The kingdom of the world has become the kingdom of our Lord and of his Christ.” That’s the kingdom into which you have entered by the blood of Christ. Because you have, live as a holy one in the very presence of God.