An Invitation to Nones 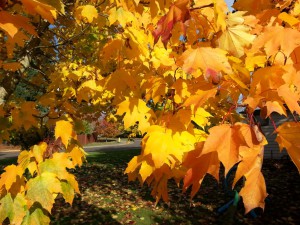 One afternoon last fall clouds parted long enough for the sun to suffuse the yellow-tinged-with-red maple leaves with a particularly rich glow. The picture I snapped doesn’t adequately reflect the radiance that soon vanished. Several times in October I’ve seen magnificent sunsets, but again, pictures are a sorry attempt to capture their glory.

Recently I asked someone if he had a pastor or a church home. His response was, “No, just a rock by a stream.” I’ve seen recent media coverage of “Nones,” those who list their religious connection as “none,” of which the Portland area has more than most metropolitan areas. Some Nones choose to spend time in nature rather than attending church. Given that the None has already declined to identify with religion and that at least Oregon Nones are located in a region of spectacular beauty, I am not surprised.

But beauty is not the whole picture. Recently someone who no longer deals with organized religion told me her story of being deeply wounded by someone who claimed to be a believer. I cringed that someone who claimed faith in Christ could wreak such harm in the lives of others. As we spoke I reminded her that the God of the Bible is not a distant deity, uninvolved in the horrible suffering that takes place at times. Rather, he is the God who sent his own Son, not just as a tourist to this earth, but to become truly human, and to experience abuse, suffering and death in the place of his people. The cross is God’s ultimate involvement in the pain we experience—but it is not the end of the story. Beyond it lies an empty tomb.

Others may be Nones because they have placed their faith in science or in their own ability to reason. I would gently suggest that theirs is a faith commitment no less than my entrusting myself to the God who reveals himself in the Bible. Both of us have starting points, and that makes all the difference.

Nearly two millennia ago a Jewish rabbi who knew Jesus spoke in the city that prided itself on being the center of philosophy and reason. He said, “The God who made the world and everything in it, being Lord of heaven and earth . . . gives to all mankind life and breath and everything.  . . . . He is actually not far from each one of us,” Acts 17:24-27 (ESV).

If you are a None enjoying the beauty around you, I invite you to continue to enjoy it, but with the far deeper appreciation that comes from knowing the One who made it. Do you know the Creator of all, who enters into a close, personal relationship with us, his creatures? I invite you to join together in worshiping him.

(This post is a slightly revised and corrected version of an article in the Newberg Graphic:, Dec. 9, 2015.)