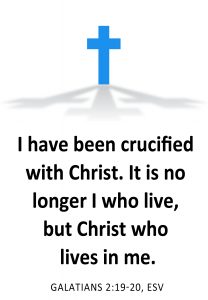 You died with Christ. You are dead to the law. Don’t underestimate these words. Paul is saying more than that you are dead to the ceremonial law. You are dead to any kind of law-works salvation, whether it is the ceremonies of the Judiazing teachers in Galatia, or the decisionism of some modern evangelism, or the salvation by good character that characterizes modern American suburbia. The heart of the gospel, the principle of salvation by grace alone, is at stake here. “This verse is the key verse of the Epistle to the Galatians; it expresses the central thought of the Epistle. The Judaizers attempted to supplement the saving work of Christ by the merit of their own obedience to the law. ‘That,’ says Paul, ‘is impossible; Christ will do everything or nothing: earn your salvation if your obedience to the law is perfect, or else trust wholly to Christ’s completed work; you cannot do both; you cannot combine merit and grace; if justification even in slightest measure is through human merit, then Christ died in vain.’” (Machen’s Notes on Galatians, p. 161). Yet, Paul is not against the law of God. The law is important. It remains as the standard of conduct, Galatians 5:22; Romans 7:12. To be dead to the law involves being alive to Christ. Your death to the law happened when Christ died in your place. Paul is talking about Christ’s death, but can say “I died to the law,” Galatians 2:19. You are free from the penalty of the law, not because you have somehow removed yourself from the jurisdiction of the law, but because Christ died in your place, taking upon himself both your guilt and the penalty you earned.

You were crucified with Christ. Appreciate how shocking Paul’s statement about having been crucified with Christ is. Roman citizens were exempt from that form of execution. Your union with Christ is so close, that when he died, you died, Romans 6:6. You were crucified with him. He bore the guilt of your sins. Thus you are free from the condemnation of the law. A dead person has no more liability to the law. You died to sin as a controlling power. If you are justified (declared righteous in God’s sight), you must also be sanctified (released from the controlling power of sin). For that to happen you need to die with Christ and be raised with him.

You are alive in Christ. You were raised with Christ. The death of Christ is important, but it is not the end of the story. You are united to Christ in his resurrection. Not only are you justified by Christ’s death, but you are sanctified by the resurrected life of Christ, Romans 6:8-11; Colossians 3:1-3. Historically the church has focused on the death of Christ in the place of his people. That is good, but don’t loose sight of the power of Christ’s resurrection. This union is a union by faith. Christ lives in you. His death and resurrection are proof of his love. Young or old, you can sing, “Jesus loves me, this I know, for the Bible tells me so.” You live by faith in the Son of God. It is only as you trust him that you have this new life. Isaiah 51 looks back to the evidence of God’s faithfulness and love in bringing his people out of Egypt, safely through the waters. Then he looks ahead to what God will do for his people, first bringing them back from the Babylonian captivity, but beyond that, to the great salvation of the day of the Lord. The whole flow of God’s saving work looked forward to resurrection. “[I]n Paul there is no more important conclusion about the Christian life, nothing about its structure that is more basic than this consideration: the Christian life in its entirety is to be subsumed under the category of resurrection. Pointedly, the Christian life is resurrection life. . . . It is in this light that statements like Galatians 2:20 (‘I no longer live, but Christ lives in me’)—autobiographical, but surely applicable to every Christian—ought to be read.” (Richard B. Gaffin, Jr., By Faith Not By Sight, p. 77).

You still live in the flesh. Paul is realistic about the Christian life. The life you live is lived in the flesh. That term for Paul has negative connotations. It is usually fallen, sinful flesh. Paul does not believe that a Christian has achieved total perfection in this life. There is a tension which points to the future. You are united to the risen Savior. Therefore you cannot sin. You must not sin. Yet you still live in this sinful flesh, thus the anguish of Romans 7. The Christian life is a battle, a struggle. Look forward to the consummation, the second step in your resurrection. You can live only by trust, which is the essence of faith. It is dependence upon Christ. Live by trust in the One who gave himself. The gospel is grace, a free gift. The result of your union with Christ is the new life you have in him.

You do have a new life in Christ. No, it’s not free from temptation or suffering. But while you still live in the flesh you trust in your perfect Savior, and in the strength he gives, look forward to the perfection that will characterize you at his coming.