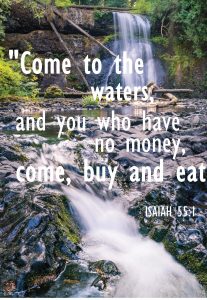 What is the problem? Beware of the poverty of riches. The letters to most of the other churches (except Smyrna and Philadelphia) contain warnings about shortcomings or sins in the church. All the preceding six contain some measure of praise, even if it is only to a few (Revelation 3:4). But Jesus has no words of commendation or praise for this church. It is a letter of warning—though it does contain a call to repentance and holds out an offer of grace. The city of Laodicea was wealthy. An important trade city, it considered itself self-sufficient. When damaged by the same earthquakes that had devastated Philadelphia, it declined aid from the emperor, choosing to rebuild on its own. The city was noted for making black woolen garments. It had a medical school, where physicians had written about ophthalmology, and may have produced eye salve for treatment. The church at Laodicea reflected the atmosphere of the city. It considered itself wealthy and self-sufficient. This seems to be not just a pretense, but the way the church actually saw herself. But Jesus sees below the impression. He describes the condition of her heart: wretched, pitiful, poor, blind, and naked. The church believed herself to be affluent. But Jesus says she is sick.

Don’t be lukewarm! Jesus knows the works of the church. Self-impression, self-evaluation are dangerous. Jesus looks at what the church does, and it does not match what the church believes about herself. The works show the Lord that the church is neither hot nor cold, just insipidly lukewarm. (Perhaps you’ve had a similar reaction to a cup of coffee that you let sit just a little too long.) Sometimes the imagery has been taken to mean that Jesus wishes the church were either hot (warmly zealous for him) or cold (opposed to him), but instead it is a blah lukewarm. But the Bible doesn’t usually describe God as saying that open, strong opposition to him is better than attempted neutrality. More likely the imagery touches the church because of local geography and hydrology. Hierapolis, six miles to the north, had hot, medicinal springs. Colosse, just a little further to the south-east, had a refreshingly cold mountain stream for a water supply. But the Lycus River, on which the city stood, had slow-moving, muddy water. An aqueduct brought water in from hot springs to the south, but it likely arrived in the city as something lukewarm—not the cool, clear, refreshing drink you long for. The church’s works, whether evangelistic outreach or other activities, were as unpalatable as the city’s water supply. What are you tempted to do when you take a mouthful of a drink that proves surprisingly bad? You are tempted to spit it out. Jesus doesn’t mince words. What he is about to do to this church is “spit you out of my mouth.” To be reject that way by the Lord is serious business indeed. It is a graphic way of describing eternal rejection. How does Jesus see your life and your witness? “This church needs an injection of Christ’s resurrection power, since they are in the worst condition of all the churches in the letters.” (G. K. Beale, The Book of Revelation, p. 302).

Who diagnoses the problem? Jesus identifies himself as the Amen. The word Amen usually means to affirm or believe something. That’s why we use it at the end of a prayer, and at other points in worship. Jesus emphasizes certain things he says by introducing them with “Truly I say…” or, literally, “Amen, amen, I say….” In Isaiah 65:15 it is used as a name, describing God. And here it describes Jesus. Faithful and true help explain what it means. And Jesus is the true, the ultimate witness. That contrasts with uncertain, useless witness of the church that had identified itself with the spirit of the age and the city in which it lived.

Jesus is the beginning. The term can mean chief, or ruler, but more likely here has the more basic meaning of first. Colossians 1:15–20 gives you Christ Jesus, not only as the ruler, but as the originator of God’s new creation. The Word, by whom the original creation came into being, is the beginner of the new creation, the kingdom of God. It has riches far greater than anything Laodicea could offer.

What does Christ offer you? Come, buy from your Lord. There may not be words of praise for this church or any in it, but Jesus counsels you to repent. Listen, when he tells you that you are not self-sufficient, but needy! It was the self-righteous Pharisees who saw no need for Jesus. He not only commands repentance, he offers to supply what you need: the riches of pure gold, white clothes to cover your shame, and eye salve to enable you to see properly. How can you buy these things? Read Isaiah 55:1–2. This is a marketplace for those who have no money! This is rich, free, abundant grace offered to you as you recognize your need for Christ and turn to him. Repentance is not only something that happens at the beginning of your Christian life. It has to be a daily turning from sin and to the Savior, recognizing your poverty and partaking of the riches he offers.

Jesus is knocking at the door. Don’t think of this as Jesus begging to come in. Rather, he is the returning master of Matthew 12:35–40. “Jesus’ knock is not that of a homeless traveler, standing outside the locked door of a human heart, seeking shelter. Rather, he is the master of the house, and he will burst through the door in in sovereign judgment (James 5:9).” (Dennis E. Johnson, The Triumph of the Lamb, pages 92–93). There is implied threat as he enters—if those supposedly serving him have become lax and self-satisfied. But his purpose in coming in is to have table fellowship with those who serve him. While his coming is ultimately future, he does come to us today and invites us to have table fellowship with him. I saw a link to this: “Tomorrow is the big day! Tons of people around the world will be taking part, and we’ll celebrate it tomorrow at church with food and enthusiasm! No, I’m not talking about the Super Bowl. Christ has risen, and so in celebration, we’ll worship him as God and receive his body and blood. Assemble with the saints. Don’t be a pagan.” Jesus’ reference to eating and drinking has a sacramental point. At the heart of the Christian life is fellowship with the living God. And Jesus comes to you and invites you to the fellowship of a meal. Both the sacrament of the Lord’s Supper and the words of Jesus here also look ahead to what will be coming at the end of this book of Revelation—the wedding feast of the Lamb. Because this is the returning King who is knocking at the door, he not only has table fellowship with his people, but as the overcomer, he invites those who overcome to join in his triumphant rule.

Jesus is the one who has overcome because he was first the faithful witness, testifying to his Father and doing his Father’s will—to the point of death. He now calls you to recognize your own poverty. He offers you the riches of—himself! Come, trusting, and have table fellowship with him.