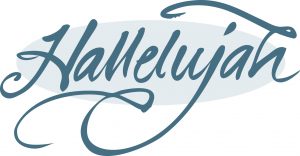 Shout “Hallelujah”! Praise contrasts with the woes of judgment. Revelation 18 has been unpleasant, even grim. God has wreaked judgment on the prostitute, Babylon, the symbolic representation of the forces who have been opposing God and persecuting the church. But the justice of God cannot tolerate rebellion. God will not allow those who have been persecuting his church to go unpunished. “Woe” is used repeatedly in Revelation 18 as those who have shared in the sins of Babylon and who have been seduced by her, mourn over her destruction—because it will also be their destruction. In contrast with the “woes” of Revelation 18, listen to the repeated shouts of “Hallelujah!” in Revelation 19. This shout comes from a great multitude, reminding you of Revelation 7:9.

Praise God for his display of justice. Hallelujah is a transliteration of Hebrew, “Praise the Lord,” used in the Hallel, Psalms 113–118, used at the Passover and elsewhere. The cry in the Psalms celebrate God’s victories over his enemies, and provide a powerful background for this celebration of his final victory. God had directed his plagues against Egypt. Exodus describes not only the mourning in Egypt, but also the song of triumph on the far bank of the sea. “The saints offer praise only to God because he alone deposed Babylon and deserves glory for this deed, which accomplished ‘salvation’ for his people and demonstrated his ‘power.’ This hallelujah and those to follow stand in stark contrast to the laments in 18:9–19.” (G. K. Beale, The Book of Revelation, p. 926). The cry of the multitude is echoed and confirmed by angelic voices and a cry from the throne.

Our Lord God Almighty has begin to reign. This cry of praise focuses on the kingly rule, the reign of God. It force is not simply that God reigns eternally, as true as that is. But the emphasis is on the beginning of a rule that goes on forever. God has always been King. The rule of God became evident in the coming of the Messiah, who not only preached the kingdom, but established it by his life, death, and resurrection. He ascended to his throne. But not all acknowledge his rule. He is still busy subduing all things to the glory of his Father. But in this text John takes you to the end of this age, to the point when every knee bows to Christ and every tongue confesses that He is Lord.

Join the wedding feast of the Lamb. John gives you a glimpse of the bride. Part of the final Hallelujah, a shout coming from a multitude, but accompanied by theophanic sounds, is mention of the wedding of the Lamb and of his bride. John sometimes gives sneak previews. Revelation 11:7 mentions the beast coming up out of the Abyss, though the beast doesn’t make its entrance until Revelation 13. Here in Revelation 19 the bride is mentioned, but she will not be described in detail until Revelation 21. When she appears there, what John sees and describes for you is a great city, not Babylon, but the New Jerusalem.

Prepare for the wedding. Why does so much work and preparation go into a wedding? Because the bride wants to be perfect for the bridegroom. John draws attention to the bridal gown, fine linen, bright and clean. He also tells you that it represents the righteous acts of the saints. It is not that the bride earns her place by her own efforts. What she has, she receives from the her Lord, Isaiah 61:10. But, they are her works, because her Lord is working in and through her. Your sanctification is something that is important to your Lord.

Welcome to the feast! A majestic angel commands John to write, pronouncing God’s blessing on those invited to the wedding feast of the Lamb, Revelation 19:9. The figure is so majestic that John fell at his feet to worship him, earning a strong rebuke from a fellow creature. He provides a dramatic reminder that God alone is to be worshiped. The wedding feast is a great banquet, celebrating the victory of the Lord Jesus Christ. It is foreshadowed by the promised banquet of Isaiah 25. “The culmination of God’s redemptive plan is often pictured in Scripture as a feast overflowing with joy and rich food and drink. . . . Weddings and feasting belong together (Matt. 22:1–14), and the blessed guests who are invited to the Lamb’s wedding feast are themselves included in the bride who is so honored by her Husband’s love.” (Dennis. E. Johnson, Triumph of the Lamb, p. 264). Do away with the idea that eternal glory is some kind of ephemeral, hazy existence. It includes a real banquet, rich food, aged wine. The triumph of Christ over death is a real victory and results in real celebration. John’s imagery gets complicated. The bride is the church, but those who receive the invitation are also part of the bride. Thus it is no accident that when the Lord instituted the Lord’s Supper, he did so at the Passover Feast. The small piece of bread, the cup that we drink, not only point back to his suffering and death, but also give you a foretaste of a much richer banquet that you will enjoy in perfect fellowship with him in the new heavens and earth.

The Lord himself invites you to his banquet. That is reason to shout, Hallelujah!