A Song of Thanksgiving 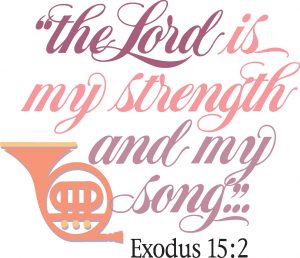 Before you started on the turkey, did you list things for which to be thankful? And did you thank God? Long before the Pilgrims celebrated Thanksgiving, God’s people on the eastern shore of the sea did so. See Exodus 15 and its echo in Revelation 15.

Sing thanksgiving to the victorious Lord! Your God has conquered, so thank him. The Lord had brought the plagues on Egypt and Pharaoh had finally let Israel go. But then he changed his mind, pursued them to force them back, only to have the Lord perform a mighty miracle and deliver Israel through the sea. Now, with Pharaoh’s army drowned, Moses composes this song, which he and the people sing. Noticed that Miriam, the sister of Moses and Aaron, is active in leading the women in an antiphonal response. The praise for the mighty victory is echoed in the Psalms and Prophets. When God performs his mighty, saving acts, his people must respond with praise.

Keep on singing the song of Moses and of the Lamb. The events of the Exodus anticipate the far greater deliverance that God would accomplish through his Son, the prophet greater than Moses. When the Lord brings judgment on those who are enemies of him and his people, his people respond with a song of praise. The setting of Revelation 15 recalls that of Exodus, and the song is identified as the song of Moses. But, as God’s people in the new covenant experience the reality of Christ’s completed work, the hymn is also identified as the song of the Lamb. “Just as Israel praised God by the sea after he delivered them from Pharaoh, so the church praises God for defeating the beast on their behalf. Like God’s people of old, so God’s new covenant people praise him by singing ‘the song of Moses.’ Their song is a hymn of deliverance and praise of God’s attributes like the song in Exod. 15:1-18. . . . The song here is about the much greater deliverance accomplished through the Lamb’s work, so that it is called the Lamb’s song as well as Moses’.”(G. K. Beale, The Book of Revelation, NIGTC, p. 792).

Praise God for who he is. Focus on the majesty of your Lord. The song begins with “I” as Moses and the people make this their song. The focus, however, is not on Moses or Israel, but on the Lord, the great God who has redeemed his people. He has done battle with the enemy and with the gods of Egypt. Notice the repeated use of “I” in verse 9, reflecting the boasting of the foe, only to be destroyed by the breath of God. Moses moves beyond identifying what God has done to describing God’s character—his mercy, power, and faithfulness. “Yahweh God is the main, most often repeated subject. The person of God is described as loving and sharing. He is the believers’ strength and saving One. He is a true King; he is a fighter as he leads his people to victory; he is the faithful one (v 3). He is majestic in power, incomparable in his holiness, glory, and wonder-working excellence. He is the ever and forever reigning King.” (Gerard Van Groningen, From Creation to Consummation, p. 306).

Rest in the Lord’s unfailing love. The term describes unfailing, covenantal commitment. You would expect the term to be used to describe our commitment to God, and it is appropriately used that way. But the overwhelming use of the term in the Bible is to describe God’s commitment to us, his people. The pillar of cloud and fire showed the presence of God with his people—the Immanuel principle. You and I, like the author of Revelation, live in a time when we have seen that come to expression in the incarnation. We have witnessed the full redemption God has provided for us.

Your Lord is King! Your God brings you into your inheritance. Moses has his eye on the future. The deliverance Israel has experienced is the guarantee that the work of redemption will be completed. In a sense, this song closes the account of the Exodus: Israel has been set free from Egypt. But the going out from Egypt is incomplete without the going into the promised land of Canaan. The language of taking a vine and planting it shows the personal involvement of the Lord with his people. The power displayed in the Exodus would not only comfort God’s people, it would terrify the pagan enemies they would face. You see it in Rahab’s words to the spies 40 years later. Not only is the Lord going to bring his people into their inheritance, but he himself would pick a place where he would live in their midst, symbolically taking up residence in the temple.

Sing to your King! The conclusion of the song expresses something that had been implied through the history of God’s dealing with his people up to this point, but now comes to explicit expression. The Lord reigns! He is King! The reality of that kingship would be unfolded through the monarchy of the Old Testament. When Jesus arrives as the heir to the throne of his father, David, his teaching focuses on the kingdom. Paradoxically he ascends the throne via ascending the cross. But he does triumph. In Revelation 19 he is identified as the “King of kings and Lord of lords.”

Because he is King, because he has redeemed you, serve him, and join in the song of Moses and of the Lamb.