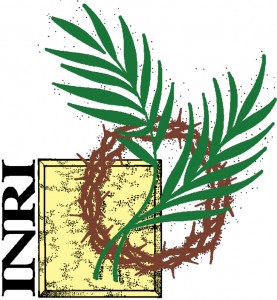 This wasn’t a huge sign. It probably was made of painted wood, and it listed the crime for which the victim was being executed. But, ironically, what the sign described in John 19:19-22 stated was both false and true.

Christ died as your king as the sign described in John 19:19-22 stated. Christ was accused of being a king. The priests brought the political charge of being a king because their accusation of blasphemy would have carried no weight in a Roman court. And they needed the Roman court to pronounce and carry out the death penalty. When Pilate questioned the unlikely looking king, Jesus acknowledged his kingship, John 18:37

Not only was he accused, but Christ was condemned as your messianic king. Pilate kept referring to Jesus as “the king of the Jews.” Part of Christ’s humiliation was having himself and his kingship used as a tool for Pilate to mock the leaders of Israel. The crown of thorns and the brutal mockery of the soldiers amplified Pilate’s reference. What king would allow himself to be abused and mistreated the way Jesus was?

Pilate’s reference to Jesus as king was also part of his attempt to release Jesus. He knew Jesus was innocent, but he feared for his own position. Pilate was a thoroughly modern, pragmatic man, more concerned with the kingdoms of this world than he was with the King who stood before him. So, in the end, he ordered that Jesus be crucified.

Yet the sign attached to the cross made clear that Jesus was condemned and executed as the messianic king. He died, not as a murderer or insurrectionist, but as the king. John’s Gospel tells you that the sign was in three languages: Aramaic, the language used in Israel, Latin, the language of judicial process and law, and Greek, the common language of commerce, trade, and even conversation. Virtually no literate person passing the cross could remain ignorant of the charge for which he was condemned.

Because he died as king, Christ is your king! Jesus’ preaching had centered on the kingdom. His miracles were visible manifestations of the kingdom. The kingdom was present where the king was. That is the reason John records Pilate’s stubborn, “What I have written, I have written.” No, John does not respect Pilate, but despite himself he is giving official recognition. The name Jesus, meaning Savior, is affixed above the Messiah’s head. His kingship is recognized as the official reason for his death. Herman Ridderbos writes: “So his [Pilate’s] last word, brief and to the point, was ‘What I have written I have written.’ Having said that he left them with their ‘king.’ In this remarkable detail, which occurs only in John, we see the continuation of the line that runs through the entire trial before Pilate: he still can still not exercise any power other than what has been ‘given from above’ (vs. 11). What he was unwilling to undo—let the crucified Jesus of Nazareth be identified as the Messiah, the king of Israel—is, in fact, the pivotal issue in the entire passion narrative. And this is so in what follows, as Pilate and ‘the Jews’ recede into the background and the focus is shifted to the crucified Jesus himself.” (The Gospel of John: A Theological Commentary, p. 607.)

The title “The King of the Jews” was both true and a lie. Jesus had indeed come to his covenant people, Israel, as king. But his kingship could never be limited to one people, to a single nation. His kingdom is worldwide, including people from every tribe,tongue, and nation. He is indeed the king, although his kingdom is not of this world. Yes, it (or part of it) is located here, but its origin is in heaven. And that is where the king presently resides.

“The King of the Jews” conveniently tries to push Christ’s kingship off. If he is king, he is king of someone else. I don’t have to submit to him. The implication of Pilate’s sign is the position of many today.

But you need to commit yourself to obey that king, to live as his distinctive people. You can ignore and oppose him. There is no neutrality. John’s Gospel calls you to trust in him and identify with your king as you seek to serve him with all that you are.

The sign on the cross was false. It was Pilate’s effort at mocking the Jews. But in a deeper sense it was profoundly true. Jesus is indeed the king. How do you read the sign? Do you acknowledge him as your King?