A Radiant Face, a Veil, and the Spirit 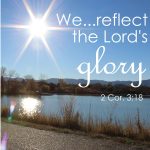 Moses’ radiant face was veiled. The face of Moses shone with the glory of God. Israel had sinned deeply—to the point that God threatened to destroy them and to make a new nation from Moses. But Moses had interceded, offering even to have his name blotted form God’s book, if possible. Of course, Moses was incapable of redeeming his people, but for the sake of the prophet greater than Moses, the Lord forgave them. Again Moses went up the mountain, saw the glory of God, and received a new engraving of the Commandments, the covenant document. The face to face encounter with God left the face of Moses radiant. The glory of God shone from his face, making the people afraid until he called them near. With his face unveiled he repeated to the people the commands the Lord had given him on the mountain. Instead of destroying his people, God forgave them. He still would bring them into the promised land. He still would be their God.

Moses had to veil his face. The glory radiating from the face of Moses was too great for the people to bear. So he used a veil to cover his face, a veil that he apparently wore as he went about his work of leading the people. But, when he entered the tent of meeting and spoke with the Lord, he removed the veil. They had face to face conversation in the richest sense of the word. As wonderful as that glory was, it could not last. Moses was a great prophet, but merely human. He could not be the perfect mediator. And although we do not know how long the radiance lasted, it was temporary. There came a time when Moses no longer needed a veil to protect the people from the reflected glory. Paul, in 2 Corinthians 3, describes that glory of Moses as fading. It could not last, for Moses was only human. It could not last because, as great as was the redemption from Egypt and the inheritance of the promised land, those were pictures, types, of something better.

The ministry of the Spirit is more glorious. The letter kills, the Spirit gives life. Paul understood what Jesus told the two disciples on the road to Emmaus: the entire Scriptures focus on him. The radiance of the face of Moses in the desert is minor compared to Christ revealing the Father to you. In 2 Corinthians 3 Paul describes his gospel proclaiming the good news of Jesus Christ as a ministry of the Spirit. What does he mean when he says, the letter kills, but the Spirit gives life? The expression has been mistakenly interpreted to mean that the literal sense of Scripture is dead or unprofitable, while some mystical, spiritual sense gives life. Or it is sometimes taken in the sense, “this may be beyond the letter, but is within the spirit (general sense) of the law.” Thus it is sometimes used to excuse ignoring provisions of God’s law. Paul is making the point that the law alone cannot justify. His Jewish contemporaries were doing what Paul himself had done as a Pharisee—reducing the law to manageable dimensions, and then seeking to attain righteousness by their own efforts. The law can only condemn sinners, Galatians 3:10,11. The letter, the written law, can only kill. As wonderful as was the intercession Moses offered, as great as was God’s forgiveness, it was limited. The people were forgiven a specific offense. They entered the promised land, from which they would eventually be exiled. A ministry greater than that of Moses, one that really took away sin, one that changed hearts and lives was needed. And that is the ministry of the Spirit, the good news that Paul preached.

See the glory of God in the risen Savior. The God whose glory was temporarily revealed in the fading radiance of the face of Moses, has now revealed his glory in his Son, the Lord Jesus Christ. That glory may have been hard to see as Christ humbled himself and became our Savior. But his resurrection is the Father glorifying him, declaring him just, and in him declaring us just and making us his glorious children. Once the reality has come, to focus on the type is to reject the reality of God’s great salvation. Yet, where the Spirit works, Satan, the god of this age, also works. He tries to harden hearts. He attempts to pull people away from Christ to focus on their own works. The hardness of heart of unbelieving Israel is like the veil over the face of Moses. They failed to see the glory of God in Christ. “As the true God by His Spirit illumines the minds of believers, enabling them to behold the glory of Christ in the gospel, so the false god of the present age has a counter-spirit at work (or is a counter spirit), which blinds the minds of the unbelieving that the light of the gospel of the glory of Christ should not dawn upon them.” (Geerhardus Vos, “The Eschatalogical Aspect of the Pauline Conception of the Spirit,” Redemptive History and Biblical Interpretation, p. 120). You in whom the Spirit works, you who are in Christ, reflect God’s glory, as by the power of the Spirit who raised Christ, you are being transformed into ever increasing glory, 2 Corinthians 3:18. Veiling blindness can hide Christ and tempt you to trust your own works. Or it can blur your vision of the glory into which you are being transformed. You are a people who are being changed into what you will be in glory.

The Lord is the Spirit. How closely connected are Christ and the Spirit? Christ and the Holy Spirit are identified in their work. Paul is not confusing the second and third persons of the Trinity. The connection between Christ and the Spirit is so close that Paul can identify them in their work. By virtue of Christ’s resurrection and ascension, the Holy Spirit became His to pour out. The Spirit came at Pentecost to continue the work of the glorified Christ. “Paul’s point is that by virtue of his exaltation (resurrection and ascension) Christ, as last Adam and second man, has come into such permanent and complete possession of the Spirit that the two are equated in their activity. The two are seen as one, as they have been made one in the eschatological work of giving life to the church, that life which has its visible ‘firstfruits’ in Christ’s own resurrection.” Richard B. Gaffin, Jr., Perspectives on Pentecost, pp. 18,19). The God who said, let light shine out of darkness has done an equally spectacular work in shining into your life, giving you the light of the glory of God in the face of Christ, 2 Corinthians 4:6.

It would have been wonderful to see the radiant face of Moses. But you have something better. You see Christ, and in him the Spirit is shaping you in the knowledge of the glory of God! Is your life f\reflecting that glory today?