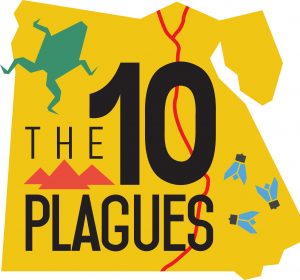 Some differences are important, others not so much. The crucially important difference is the one that God makes. In the midst of the plagues God brought on Egypt, he made a difference between his people and those who opposed him, Exodus 8:22-23.

God has made a distinction. The plagues display God’s power. Exodus 8 is part of Moses’ description of the ten plagues that God sent on Egypt when Pharaoh refused to let God’s people go. The three sets of three plagues each show an increasing intensity before culminating in the tenth, which caused the death of the firstborn in the houses of the Egyptians. The plagues reflect a repeated and increasing hardening of heart on the part of Pharaoh. Along with that the power of the Egyptian magicians decreases.

God shows that his people belong to him. The first three plagues impacted the whole land of Egypt, including Goshen, where the Israelites lived. But beginning with the fourth plague God made a difference between his people and the Egyptians. This, and the subsequent plagues, did not strike the people of Israel. God was showing that Israel was his own people. The plagues were not just acts of nature or random acts of some deity. Rather, it was the Lord, the God of Israel, who was reaching out his powerful arm to redeem his people. That distinction is explicitly repeated in connection with the last plague, Exodus 11:7. Why did God do this?

God’s distinction is gracious. You belong to God because he has chosen you. Although the Egyptians were treating the Israelites cruelly, Israel was far from perfect. They, too, deserved to come under God’s judgment. But the Lord remembers his covenant. Peter reflects on God’s grace in calling his people to be his own. We belong to God, not because of who we are or what we do, but because God draws us to himself in Christ. “The Israelites had also suffered under the plagues. Even the Lord’s own people deserve the wrath of God unless God for­gives their sins. In their sin, they are one with the life of the world; only by God’s grace are they distinguished from the world. That grace of God would now be manifested in Egypt, so that Pharaoh could see that it was not simply a divine power that was at work but the Lord Himself, who looks after His peo­ple.” (S. G. DeGraaf, Promise and Deliverance, Vol. 1, p. 269). God was reassuring Israel that they truly belonged to him—no matter how bleak their circumstances might be. That is a lesson God’s people today need to remember.

God’s distinction draws people to himself. Not only was God drawing his covenant people to himself, but the distinction he made had an impact on those who were not yet his people. As you look at the plague of hail, some of the Egyptians took Moses at his word and took steps to protect their servants and cattle. It was not just Moses they respected. The feared the word of the Lord. The process is more evident as the tenth plague takes place. When Israel left Egypt, they did not leave alone. Many people, a “mixed multitude” accompanied them, Ex. 12:38. They had become convinced that the God of Israel was the true God. At Sinai, they are incorporated into God’s covenant people. Similarly, Peter reminds you, live the kind of life that even unbelievers will recognize and will glorify God, 1 Peter 2:12.

Live as those who belong to God. Thank God for his grace. The distinction in the plague of flies is only the beginning. It continues in the following plagues. But in the tenth it becomes explicitly clear that Israel also is subject to judgment—unless protected by the blood of the Passover lamb. Peter reminds you that you are God’s people because of the work of Christ in your place. Understand what grace is—and thank God for showing it to you in Christ.

Reflect the character of your God in the way you speak and live. Because God has made a distinction and has constituted you as his people, he calls you to live as his people. In a world of increasing selfishness, in a culture that promotes self-centeredness and instant gratification, God calls you to live holy lives, to deal with suffering with your Lord at the center of your thinking and responding.

God has made a distinction between the world and his people—by giving as a sacrifice the one who bears the sin of the world. Live as God’s distinct people.