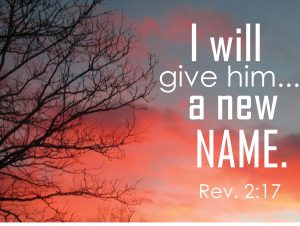 The One with the sword knows you. Jesus is the true bearer of the sword. Pergamum was a city loyal to Rome. It had a temple dedicated to the divine Augustus and the goddess Roma, another dedicated to Asklepiosn the god of healing, who held a staff entwined with a serpent, and had a large altar to Zeus on the highest point of the city. Any one of those points would have been reason for Jesus to speak of the city as the place where Satan’s throne was located. The city was loyal to Rome, and Roman authority was maintained by her legions with their sharp swords. Paul could speak of the authority of the Roman rulers as the power of the sword. In contrast to the authority of Rome, Jesus identifies himself, with imagery repeated from the first chapter, as having a sharp, double-edged sword coming out of his mouth. Rome might have power to take life, but the authority over eternal life and death belongs to Jesus. He was once an infant in Bethlehem, but having been raised from the dead and exalted to the right hand of the Father, he is the victorious sword-bearer.

Be loyal to your King. The church at Pergamum understood Christ’s victory. Jesus commends the church for its faithfulness to him. That commitment had been tested by persecution, even resulting in the death of one of her members, Antipas, who had paid with his life for his commitment to Christ. He had refused to compromise with the idolatry around him, recognizing that its source was satanic. “The concluding phrase of v 13 (‘where Satan dwells’) is a contrast with the first clause in the verse (‘I know where you dwell’) in order to accentuate the idea that light and darkness cannot dwell together in peaceful coexistence. Therefore, a witnessing church will be a persecuted church.” (G. K. Beale, The Book of Revelation, NIGTC, p. 247).

Repent of idolatry. Beware of the teaching of Balaam. Numbers 22-24 gives the account of King Balak hiring the prophet Balaam to curse Israel. You are familiar with Balaam’s donkey speaking to the prophet. And when Balaam finally does prophecy, out his mouth come, not curses, but blessing on Israel. But when that failed, Balaam advised Balak to entice the Israelites top join in the Moabite idolatry and related sexual immorality. The result, as recorded in Numbers 25, was that the Lord punished Israel with a plague that killed 24,000 of them. Jesus uses the name of Balaam to describe false teachers in the church who led the people astray. Though the church had stood strong against external pressure, it had allowed very dangerous teaching to corrupt it from within. A group called the Nicolaitans taught similar things. The danger of compromise in the face of fear or embarrassment continues to threaten the church.

Exercise discipline—or else! The church as a whole is responsible for the teaching it allows. Jesus warns that if they do not repent, he will come and use the sword against them. The church at Corinth faced Christ’s discipline because of the abuses it allowed at the Lord’s Table. Church discipline is one of the marks of the church. Don’t treat sin lightly—the Lord does not. Yet, the warning is not the last word.

Christ has given you a new name. Eat the hidden manna. To those who resist temptation, to those that overcome, Jesus promises two things. Manna was the bread from heaven on which god fed the Israelites during their 40 years in the wilderness. It was not just the physical food. Moses reminded the people that they did not live by bread alone, but by every word the Lord spoke. As Jesus provided food for the 5,000 in the wilderness, he identified himself as the bread of life and instructed his people to feed on him.

Live up to your new name. Jesus also promises to the overcomer a white stone. The significance of the stone lies, not so much in its color, but in the name engraved in it. The high priest had two onyx stones on his robe, engraved with the names of the tribes. Here the believer is given a name known to him. The element of secrecy reflects the idea of control through use of the name. The believer’s name is know to them and to God. They are under his protection. As the Lord redeems Israel from its idolatrous rebellion and calls her to fellowship with himself, he gives his people a new name, Isaiah 62:2. The name appears in Revelation 3:12, and more significantly in 19:11-16 on the divine rider on the white horse. Notice how secrecy and revelation are combined in the space of a few verses. “The name is known only to the recipient, just as the name of the Word of God, who rides a white horse, is known only to himself (Rev. 19:12-13). The name is a shared secret between the Lord and the recipient, blending mystery and disclosure.” (Dennis E. Johnson, Triumph of the Lamb, p. 78). Being named by God, having his name, involves fellowship with your Redeemer. The sword the Lord holds threatens judgment against the evil one and his followers, and even against those within the church who refuse to repent. But it also provides protection for those whom he feeds with manna, those to whom he gives a new name.

Joseph was told by the angel to give the name Jesus to Mary’s baby—because he would save his people from their sins. Jesus entered our world as an infant, but the purpose of the birth narratives is to show you the purpose for which he came. He died and rose for his people, and now stands with that sharp sword to protect and care for you. Rejoice, because you have been named by your Lord.